When Terri Petersen lost her husband, Garry,  to sudden heart failure at age 64 in September 2016, the loss was profound on many levels.

“He had been my seeing-eye husband for 35 years,” said Petersen, who is legally blind. “When I lost him, I wanted to be independent and not have anyone have to take care of me.” 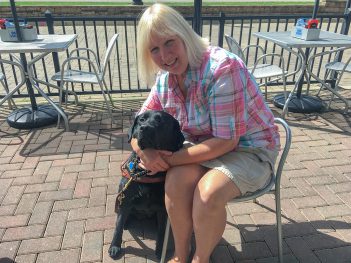 So the 62-year-old Carmel resident got her first guide dog in March 2017. She spent three weeks training with Josie, a 3-year-old black Labrador retriever, at Pilot Dog School in Columbus, Ohio. It was her first dog.

“She gives me so many non-verbal cues,” Petersen said. “She was taught not to bark. If there is something in my way, she’ll stop and let me know. She’s really, really smart. I never thought I would love an animal as much as her. We have a bond because she is so dependent on me and I’m so dependent on her. We do everything together.”

Peterson has written nearly 40 short journal reports under the title “Moonrise Reflections: My Puppy Guided Walks,” which are about her walks with Josie. She started in June.

Petersen previously had self-published 10 children’s books and in 2010 wrote a book called “How to Survive Breast Cancer with a Smile.” Petersen said a talking computer helps her write.

Petersen first developed breast cancer in 2006. After successful treatment, It came back 10 years later. She had a mastectomy in May 2016 and then had breast reconstructive surgery 11 days after Garry died.

Her son, Erik, 28, took her to Carmel to look at apartments and they decided on Sophia Square in downtown Carmel in December 2016. She lives with Erik.

“He has been a great comfort and support for me,” said Petersen, who previously lived in Greenwood. “(Downtown Carmel) is perfect for me. I can take Josie for walks. Josie and I take Uber together to doctors’ appointments.”

Petersen developed her blindness from ocular histoplasmosis, a respiratory disease. The environmental disease is caused by fungus from pigeon droppings. She contracted it first in 1977.

“I lost most of my vision in the right eye right away and then the left eye took about eight years,” Petersen said. “At 31, I became officially legally blind. I haven’t driven since then.”

My puppy loves her last walk in the evening. The streets are quiet except for the song of birds and the rustle of tree limbs that has my puppy perk up her ears and walk smartly. My puppy guides me and my memories into the moonrise.

I often remember the last moment of my late husband’s life. I held his hand as he exhaled his last breath on our back deck. I prayed, “Please don’t leave me. But if you have to, it is okay. I will always have you in my heart. I will always love you.”

And as he exhaled his last breath, I knew God was inhaling him Home.

As tears fill my eyes, I could feel a warm presence walking next to me. I imagine taking my late husband’s hand. And as I walk with my puppy as the moon rises, I smile with the sweet memories of our life together on this earth. The smell of earth, the quiet “woof” of another puppy as we pass a house and the feel of the breeze on my face, all helps me find peace. And I know that we will meet again…