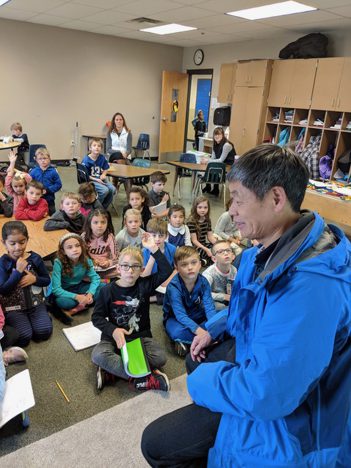 Long first tracked the endangered snub-nosed monkey in 1985 but was not able to provide photographic evidence until 1992. The primate, once thought to be extinct, is most populous in the Yunnan Province in southern China where Long is working to create a dedicated habitat. He estimates more than three-fourths of all snub-nosed monkeys live there and predicts the area also is home to an undiscovered species of the primate.

Long shared with students the importance of protecting regions for animals but also for plants and other species. He emphasized the far-reaching impact those areas have on neighboring geography.

“We need to care for (this area),” said Long, drawing a comparison to Noah’s Ark.  “We don’t want to destroy this ark. That’s why we need to pay attention.”

Besides researching monkeys, Long said his job involves scientific findings, continuing studies and outreach. Long visited the Indianapolis Zoo Nov. 28 and met with the zoo’s orangutan scientists and discussed their research on orangutan behavior. He will visit other U.S. schools and zoos to discuss his research.

Long’s visit is part of a new TPCS visiting scholars initiative to bring experts from different areas to share their knowledge with students. The school plans to host leaders in the fields of literature and civics in the near future and wants to include other subjects such as athletics and spirituality.