“Each year the members of Carmel Urban Forestry Committee look for those who are contributing toward providing a healthy, diverse environment that will sustain wildlife and is accessible to the residents of Carmel,” Marilyn Bauchat, CUFC member,  stated in an email. “Donna Manlove worked for several years in the medical technology field before she changed careers and obtained her teacher’s license at IUPUI. She became an exceptional science teacher at Carmel High School but unfortunately passed away due to cancer.” 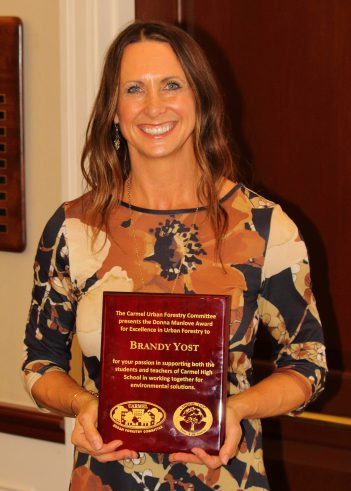 “Purdue developed the Dynamics of Climate Change program, and I went and took the three-day workshop through them,” Yost said. “Then I partnered with Carmel Green Initiative and took that material and adapted it in our area.”

The program focuses on helping teachers talk confidently about climate change with students.

“They’re given lesson plans, data and hands-on activities so they can successfully implement lessons on climate change to their students,” Yost said.

Yost was the faculty advisor for the CHS Environmental Club and Green Lights Club during her time at CHS.

“It all started with the Green Lights Club,” Yost said. “They went around the community asking residents to switch to energy-efficient compact fluorescent bulbs. The club received an award from Richard Lugar as a Lugar Energy Patriot Award recipient. After that I had a student approach me for an environmental club. So, I said yes.”

Yost was surprised to receive the award named after her former co-worker.

“I’m honored and humbled because I know Donna’s passion she had for the environment,” Yost said. “Hopefully, this shows that I am carrying on her vision.”