The Carmel Plan Commission unanimously voted in favor of a rezoning request Nov. 20 to make way for an orthopedic specialty hospital on the southeast corner of 111th and Illinois streets. 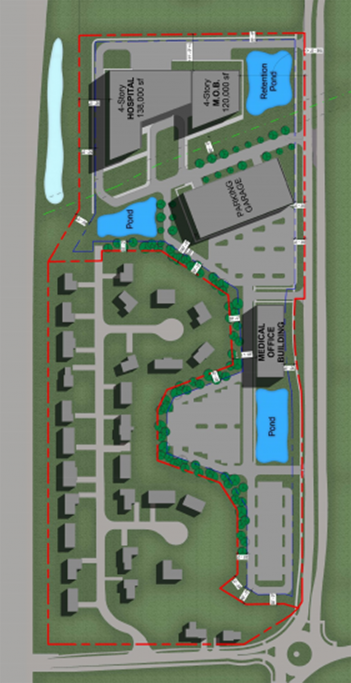 The Franciscan Health Orthopedic Center of Excellence is proposed on the 6-acre site and 11 acres to the south the hospital has under contract. Plans filed with the city state that the $130 million project will include a 135,000-square-foot hospital building and 120,000-square-foot medical office building. It will also have a multi-story parking garage.

Developers have made a few changes to the project since it first appeared before the commission in September. The location of a medical office building and pond have been swapped to move the structure away from an existing 31-home neighborhood to the east of the site. A parking garage has also been moved further away from the neighborhood.

The rezoning to Meridian Corridor only applies to the north 6 acres of the hospital’s planned campus, as several acres to the south are already have that designation. The rezoning site was previously planned to include an additional 22 homes for the adjacent neighborhood, but the extension of Illinois Street on the west side of the site left it undeveloped.

A the commission’s request, Robert Hicks, an attorney representing Franciscan, presented a master plan showing what the campus could look like if it’s expanded to include the site of the 31 homes. The hospital does not currently own that land.

“It’s something that might happen in the future if those residences were ever to be acquired and redeveloped as a commercial site,” he said.

Hicks said the hospital has made several commitments, including working with an urban forester to maintain as many trees as possible and providing interior bicycle parking.

The hospital has committed to pay property taxes for 25 years, although the Carmel City Council is expected to continue negotiating the terms. Most hospitals operate as nonprofits and are exempt from paying taxes.

The city council will have the final vote on the rezoning request.

The Franciscan Health Carmel Hospital opened in 2012 about 1.5 miles north of the proposed site of the specialty hospital.