You are at:Home»Current in Westfield»Westfield Cover Stories»Vintage Ventures: WHS grad creates documentary, films finds at every Goodwill in the state

Ryan Monson became interested in bargain vintage finds at Goodwill and similar stores while in college and thrifting was popular. That interest has transformed into a popular social media-based business is the topic of his documentary film, “Goodwill Hunting Indiana.”

The 2012 Westfield High School graduate buys most of his vintage finds at Goodwill and Salvation Army. To ramp up exposure, created a documentary for Instagram TV where he films his finds at every Goodwill in Indiana.

“I’m the type of person that will see a current situation and say what’s the one thing nobody’s doing and say, ‘OK,  I’m going to do that.’ Nobody’s doing the personality route,” he said. “I love traveling, and the coolest thing is I’m going to make history and get publicity.”

Monson said thrift-shoppers typically don’t travel beyond a narrow geographic radius, but he does. He films himself as he thrifts and then posts it for the public to watch.

Monson publishes a new episode for his documentary every Wednesday. They are available on Instagram under his username @vtgindy and also on YouTube. He started the series in July.

Monson’s path to becoming a social media celebrity began in college, when he started thrift-shopping.

“Just being in college, it’s such a popular thing to thrift, so I was thrifting a lot in college and I was just reselling a couple things, like hats I wasn’t wearing, jerseys I wasn’t wearing anymore and making two or three dollars here and there,” he said.

The Instagram account of a childhood friend caught Monson’s eye because he had nearly 10,000 followers for selling vintage shoes.

“I didn’t even know that culture existed, so I wondered if you could sell clothes,” he said. “I had no idea, so I decided I would try it.” 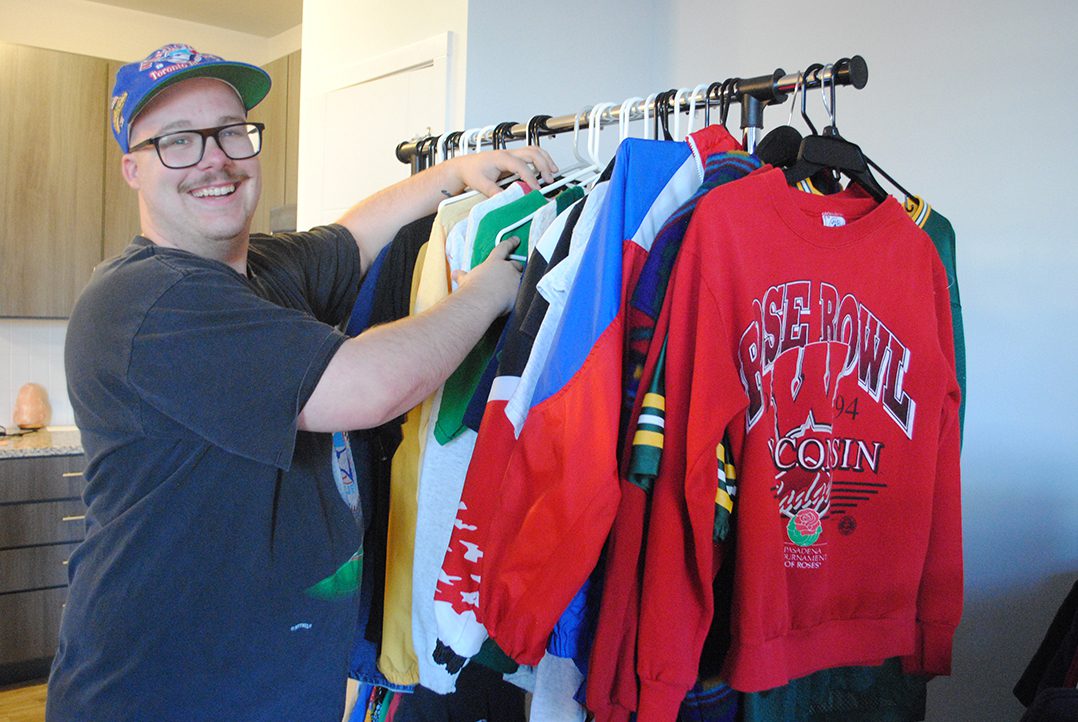 Ryan Monson stores the clothing options for his business, Vintage Indy, inside his apartment. (Photo by Anna Skinner)

In March 2017, Monson founded Midwest Athletic Supply and created an Instagram account where he sold sports-related jerseys and hats. Occasionally, he sold vintage items. When he started, Monson only had 50 Instagram followers.

Then, he met several other Indianapolis-area thrifting business owners and participated in a vintage flea market. That relationship served as the basis to transform his company into more vintage material.

In July 2017, Monson changed his business’s name to Vintage Indy and now only offers vintage items.

Managing Vintage Indy isn’t Monson’s full-time job. He is a logistics recruiter during the day, so he isn’t too concerned with making a large profit with his company. He tries to keep prices low because most of his customers are college-aged. However, some clientele are collectors. Typically, Monson barters prices with potential buyers. Much of his material sells for  between $15 and $25.

Monson began to see rapid growth on his Instagram page earlier this year. He now has more than 5,000 followers. To widen his audience, he creates Instagram polls and conducts hashtag research.

“The reason I’m so successful is because I work harder than a lot of the people,” he said. “That’s what’s made me different in being successful.”

Indianapolis customer, model and friend Matt Jones can attest to that. He came across Monson’s Instagram profile and was asked by Monson to model some Vintage Indy merchandise. Jones agreed.

“I’m willing to help anybody out who’s willing to do stuff like that,” Jones said. “I appreciate finding a good treasure from Goodwill, and he and I have gone a couple times to Goodwill on his adventure of trying to go and see and purchase something from every Goodwill store in Indiana.”

The partnership turned into a friendship.

“It’s been a cool experience following along with him and seeing how he’s progressed so far,” Jones said. “His (business) model is a unique one in the sense that he’s using Instagram as a source to create what you would call your side hustle. He found a way to find something he’s passionate about and using that as a pedestal to be able to create a business for it.”

In the future, Monson wants to operate Vintage Indy out of a store instead of his Fishers apartment. He said somewhere near Castleton or Keystone would be ideal.

“I want it to be overwhelmingly that I need to get a store before I (do),” he said. “I’m trying to keep my options open.”

Vintage is a relative term, usually meaning something a little different to everyone. For Ryan Monson, most of his merchandise is from the 1990s. The oldest item Monson has ever found is an Elvis T-shirt from 1975. The latest year Monson sells as “vintage” is 2005, but most of his vintage items are from the 1980s or ‘90s.