Judy Arnold started out at her company as the receptionist, secretary and bookkeeper.

Forty years later, the longtime Carmel resident is the owner and president of Carmel-based Data Processing Services, a software company. She acquired the business from owner Dan Barrow in 2011. The company, which started in 1972, moved to Carmel City Center from northern Indianapolis that same year. 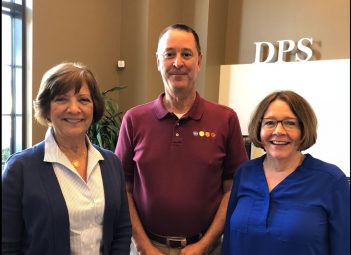 “I knew the owner and founder from friends, and my interest in joining his company was I was fascinated with technology,” Arnold said. “Back in the 1970s, people didn’t own computers or PCs. I just loved the concept of developing and writing programs. A friend suggested I talk to Dan Barrow and see about working for him.”

Barrow told Arnold if she came in to answer phones and similar tasks, he would send her to IBM classes.

“I learned programming and did that for a year or two,” Arnold said. “But my love really was in understanding and running the business. After a couple of years of (programming), the company started to grow and I came back to run the financial side of the business.”

She became the comptroller and then eventually the chief financial officer for a number of years.

“Then in 2008 or 2009, I became the chief operating officer, and it was just the perfect transition for me to acquire the business when the owner was ready to retire,” Arnold said. “I knew where everything was, the condition of things and I loved the employees. It’s been a wonderful ride.”

“She was able to break the glass ceiling and prove that hard work, dedication and passion can really pay off,” Wilson said. “Being a woman and owning your own successful, striving business is no small feat. It’s extremely rare these days to be able to say you have worked for a company for 40 years, let alone be able to say 40 years ago you started working for the company by answering their phones, and now you are the owner and president.”

“That dedication comes from something that you are passionate about,” Arnold said.

In addition, DPS has many longtime key employees, she said

“Acquiring the business and wanting it to go on was not only for selfish reasons, but just the opportunity to continue on with the wonderful group of people we have here, and the customers are just as wonderful,” Arnold said.

Arnold’s husband, Greg, has been helping out at DPS since he retired. They have two children, Geoff, Carmel, and Brian, Westfield. Each son is married with two children.