After a nearly six-hour hearing, the fate of the shooter responsible for wounding a fellow classmate and teacher May 25 at Noblesville West Middle School is still unknown.

Hamilton County Circuit Court Judge Paul A. Felix is reviewing the evidence and testimony presented. The next hearing on the case is scheduled for Nov. 14.

The hearing shed light on some of most important details of the case thus far, with the prosecution team presenting its findings to Felix. The state prosecution is asking that Moore be warded to the Dept. of Corrections, to be housed in a juvenile facility. There are two such facilities in the state, one in Pendleton and one in Logansport.

One of the looming questions over the case is about where Moore gained access to the weapons he had on May 25.

The prosecution said Moore got the guns from his home, from a gun safe located in the basement of the home. It is unclear if the keys were left in the safe, giving Moore access, or if the keys were found by Moore. Photos entered into evidence show keys dangling from the lock of unlocked safe.

The prosecution also presented a video that Moore recorded from his iPod where he shows multiple weapons and, at one point, holds a gun to his right cheek. In the video, he tells the camera that the gun is not loaded, saying “I gotta take others lives before I can take mine. You’ll see their deaths all over the news.”

Neal Rosenberg, an 11-year veteran of the Noblesville Police Dept., who is assigned to the department’s evidence room was questioned by the prosecution regarding items belonging to Moore, which were seized and included an iPad, iPod touch and LG cell phone. As part of Rosenberg’s job, he said he is responsible for investigating information found on such devices, completing forensic exams on them, and writing summaries of his findings.

Among the three devices, Rosenberg testified to finding searches of the following: Sig Sauer (a gun manufacturer), Heckler & Koch (a gun manufacturer), KNO3 (potassium nitrate, found in gunpowder), Sandy Hook, Columbine, Noblesville West Middle School blueprint, school shooter memes, inquiries about the largest mass shootings in the nation and more. Some of the searches had been deleted, Rosenberg said, but NPD software recovered those. 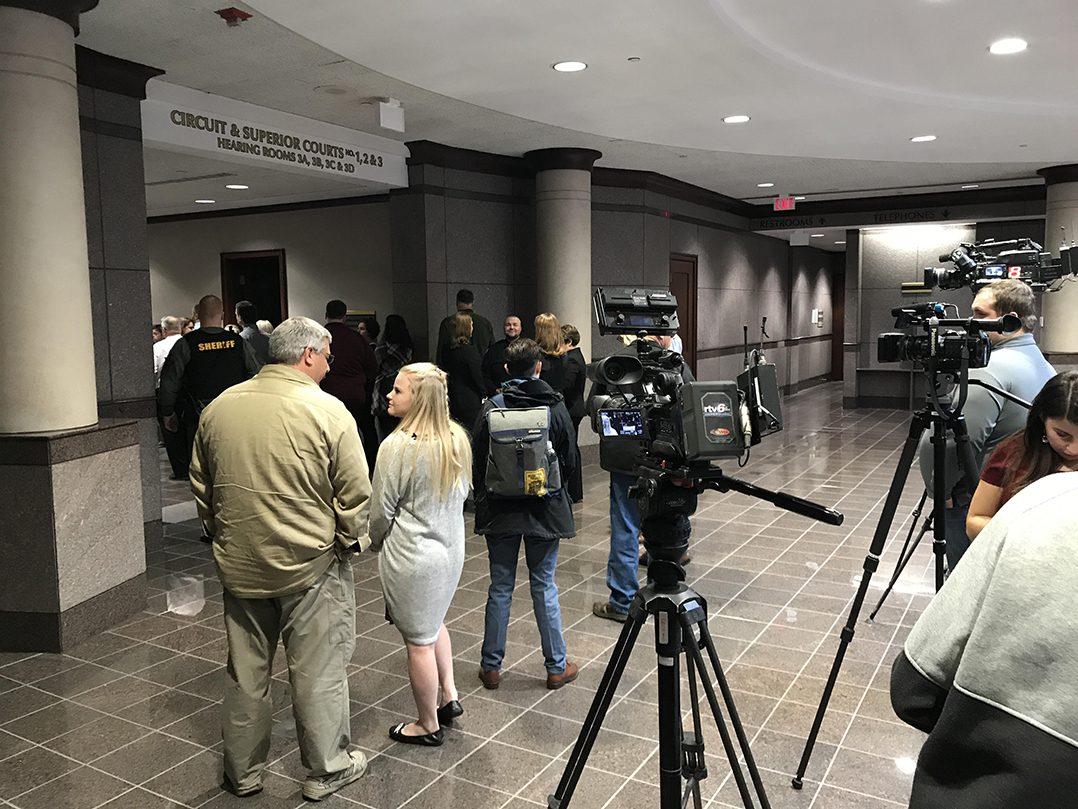 Media and the general public wait to enter the courtroom Nov. 5 for David Moore’s admission and uncontested fact-finding hearing at the Hamilton County Government and Judicial Center in Noblesville. (Photo by Sadie Hunter)

Moore is said to have transported two guns, .22- and .45-caliber handguns, in his backpack to school that morning, putting the bag in his locker. During his second class of the day, Moore is said to have finished a quiz early in teacher Jason Seaman’s science class and then asked to be excused. According to prosecutors, he returned to his locker, grabbed his backpack to retrieve the guns and then returned the class, hiding the two guns in his hooded sweatshirt.

Moore returned to the classroom. Another student let him in, and according to Seaman during his testimony, Moore began shooting, hitting Seaman first. As the shooting continued, Seaman said he used a mini basketball to hit Moore to unbalance him. By the time the shooting was over, student Ella Whistler was shot seven times and Seaman three times. Seaman has been credited since the day of the shooting for ending the incident quickly, tackling Moore and restraining him. Seaman said when he first tackled him, they both hit a wall before Seaman slung Moore to the ground, pinning both of Moore’s hands.

Seaman said while he had him pinned, he screamed at the other students in the class to get out, run and call 911. Seaman said he asked Moore if he had any other weapons on him, and Moore told him he had another gun and more ammunition in his pants pockets, along with a knife in his sweatshirt pocket. Seaman said he took the weapons and moved them away from Moore while continuing to restrain him until school resource officer Michael Steffen arrived at the classroom.

Citing two disciplinary events during Moore’s holding at the Hamilton County Juvenile Detention Center in Noblesville, the prosecution made their case by alleging Moore has a “continued obsession with violence” after May 25.

The first incident involved Moore drawing fictional images of war at the Hamilton County Juvenile Detention Center in Noblesville, where he is housed now. Kija Ireland, the juvenile corrections division commander at the facility, said those types of drawings  are against the rules and that drawing, talking about or communicating information related to guns and weapons is prohibited among the incarcerated juveniles.

The next incident involved Moore receiving Legos, which were given to him by corrections staff. A recorded phone call between Moore and his parents on Aug. 28 has Moore speaking about receiving the Legos, in which his mother, Sarah Moore, said, “Don’t build any weaponry, OK? That would look bad.”

Two months later, on Oct. 26, a video of inside Moore’s holding cell shows that he had built an extensive faux rifle using the Legos, pretending to shoot it. In the video, a guard comes by the cell, asks what Moore is building. Moore responds while hiding the object, “Nothing, I don’t know what that is.” The object falls to the floor and breaks, and once the guard leaves, Moore begins putting the item back together.

Ireland said around the same time, between Oct. 26 and 28, during a routine check of Moore’s cell, a list of items Moore wanted when eventually transferred to a different facility included “violent video games.”

Noblesville Police Dept. Detective Mike Haskett also testified Nov. 5. Haskett has been a detective for 10 years with NPD and is responsible for compiling information and directing the overall investigaton to present to prosecutors.

During his testimony, Haskett said more than 200 witnesses were interviewed after the shooting, 185 of which were students. Haskett said hundreds of items also were seized between the NPD and Hamilton County Sheriff’s office, including cell phones and other electronic devices.

Haskett said during local law enforcement’s response to the shooting, police also were dealing with another, secondary threat at Noblesville High School. In addition the second threat, he said “a number of threats” were made through text messaging and social media, all of which ultimately were not legitimate but still had to be investigated.

Upon Moore’s arrest, Haskett said he was taken to an interview room in the lower level of the criminal investigations division at the NPD. All police-suspect interactions in these rooms have audio and video recording.

The prosecution team played a video during the hearing of Moore alone in the room, talking to himself about the threats to Noblesville High School. Prosecutors later referenced the video in their final statements, saying Moore “showed excitement” at the thought of more harm being done at the high school.

Moore’s attorney, Ben Jaffe, making reference to the amount of time Moore spent alone in the room, approximately 5 hours, described the video of Moore talking to himself as “incoherent,” “nonsensical ramblings.”

When asked during his testimony by the prosecution team what he wanted for Moore, Seaman said, “I think it’s appropriate that David be detained and removed from society until it’s 100 percent sure that he is no longer a danger to himself or society.”

Cory and Julia Whistler, parents of student victim Ella Whistler were the last to testify on Nov. 5.

Both parents said they were there on their daughter’s behalf and that she did not want to attend the hearing.

“She does not want to see David ever again or be in the same room with him,” Julia said.

When asked what they each wanted for Moore’s future, they both asked for the maximum possible sentence.

“Our lives were changed that day because of a choice,” Cory said. “We didn’t have control over it and neither did the schools or community…I would like to see the maximum possible sentence. The defense and (Moore’s parents) have said they are committed to (rehabilitation for Moore) … I wish that level of commitment that is there now would have been there before the shooting.”

“I believe he should get the maximum possible sentence,” Julia said. “I would like to see him under the Dept. of Corrections and be in there as long as he possibly can.”

The prosecution team’s request to Judge Felix included no-contact orders for both the Seaman and Whistler families, the warding of Moore to the Dept. of Corrections, and putting Moore on formal probation until April 11, 2026, when he turns 21.

Judge Felix said at the Nov. 14 hearing, some additional evidence and statements may be heard, but that it would not be a “rehashing” of the Nov. 5 hearing. The next hearing is set for 9 a.m. Nov. 14 in Hamilton County Circuit Court at the Hamilton County Government and Judicial Center.