Elizabeth Young-Collins is well prepared for the “Songs of World War II” program. After all, she has been singing those songs for years. 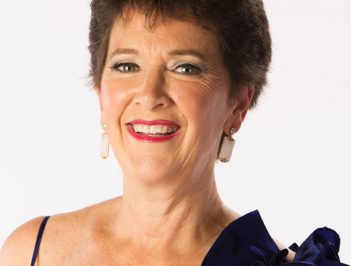 “My father was a World War II bomber pilot and earned a Purple Heart,” she said. “These songs I’ve sung for Veterans Day in Boston for years now.”

The Zionsville resident will discuss the personal history between her mother and father.

“My mother loved to sing, and she had a beautiful voice,” Young-Collins said. “I’ll mostly sing about how much music and songs meant to people during the war time.”

Two of her older siblings were born during the war.

“My father, who was a captain, would put on his Army Air Corp uniform every year to see if it still fits,” she said.

The songs include pieces made famous by The Andrews Sisters and Rosemary Clooney, among others.

Young-Collins, who has been a professional singer for more than 20 years, moved to Indianapolis with her husband, Daniel Collins, two years ago.

Young-Collins recently performed in the ensemble and had a small role in Civic Theatre’s production of “Anything Goes” in Carmel.

“I will sing as long as my voice and breath allows me to,” she said.

She performed and wrote her own show, “Why be Normal (when you really are extraordinary)” in August at IndyFringe Theatre.

Young-Collins has been doing standup comedy at Crackers Comedy Club.

“My goals is to do more shows that inspire and help people,” she said.

Admission to her library show is free but registration is required at zionsvillelibrary.org. Children under 10 must be accompanied by an adult.