You are at:Home»Current in Noblesville»Noblesville Community»Three Noblesville West Middle School teachers compete together to be the Best Buddies Champion of the Year

Three Noblesville West Middle School teachers will compete together to be named the Champion of the Year for the Indiana branch of Best Buddies International.

The first group is the first running together for the designation. 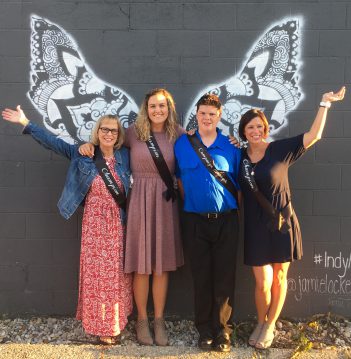 “I’m a team, because all three of us sponsor the Best Buddies Club here, so therefore I didn’t feel it was right to run as one person,” she said. “So, I presented to Best Buddies,  ‘I came here to tell you no. However, if you would allow the three of us to run together if they agree to it, I would consider it.’”

The trio has raised more than $14,000 and has a goal of $30,000. The champion who raises the most money earns the Champion of the Year title. Several of their fundraisers involved sending letters to the community, selling T-shirts and fundraising with several restaurants. At the Nov. 10 Best Buddies Indiana Champion Gala, items will be auctioned to benefi the fundraiser.

“We had to come up with a student campaign manager, a student who has intellectual disabilities, not a general education student,” Hendrickson said.

The trio chose Noah Morris, an eighth-grader who serves as the Buddy Director for the Best Buddies Club. Morris also is involved in the school corporation and the community, serving as the team manager for the eighth-grade football team.

For more or to donate, visit bestbuddieschampion.org/indiana/supporting/#TeamWest.