You are at:Home»Current in Westfield»Westfield Community»Advisory Plan Commission sends Lindley Run to council with positive recommendation 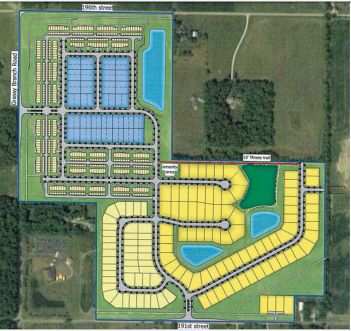 The proposal spans 106.5 acres at the southeast corner of Grassy Branch Road and 196th Street. If approved, it would offer three types of housing – for-sale townhomes, duplexes and single-family homes.

Jon Dobosiewicz, a land use professional with Nelson and Frankenberger, gave an update on the project.

If approved, the project will feature 25 percent open space, an amenities shelter, a playground, a fire pit and a fitness trail. After a public hearing and comments from plan commission members at an October meeting, the plan also now includes a 1,500-square-foot community clubhouse, a community pool and a dog park. Additional trails also were added throughout the development. Dog waste stations were added around the townhome area of the development.

“We are really trying to create some additional circuits and interactivity between the three areas (of the development),” Dobosiewicz said.

APC member Ginny Kelleher commended the project on its connectivity with other nearby subdivisions.

“I think this is probably the most interconnected subdivision within itself and other subdivisions I’ve seen so far, so I applaud you on that,” Kelleher said. “I think you’ve done a wonderful job connecting this to the things around you, including the subdivisions and the church.”