You are at:Home»Current in Zionsville»Zionsville Cover Stories»Back to Boone: Boys & Girls Club regroups as a county-wide organization

At the Oct. 27 Boys & Girls Club Be Great Breakfast fundraiser, the gym of what was formerly known as the Boys & Girls Club of Zionsville’s Club West on 700 East in Whitestown was transformed into a large dining hall. Though the worn gym walls were exposed, the floor was covered with vinyl and white tablecloths were adorned with rolled silverware. Piping-hot silver platters filled with steaming breakfast food were lined up behind the tables. Keynote speaker Chuck Pagano, former Colts head coach, sat at a table in the front.

Tim Fretz, CEO of BAGCOZ, opened the event with a big announcement.

“Effective Oct. 1, we are now the Boys & Girls Club of Boone County,” he said.

Fretz told the crowd that the Zionsville and Whitestown clubs, along with the Lebanon Area Boys and Girls Club, became the Boys & Girls Club of Boone County Oct. 1. The new club will still have three physical locations: Lebanon, Whitestown and Zionsville.

“There is a national trend of merging clubs,” Fretz said.

The structural change, which has been in progress for 10 months, allows the organization to combine fundraising efforts and restructure staff to better serve the community’s needs.

The boards of directors of both clubs have been working jointly with support and guidance from the national arm of the Boys & Girls Club. Between the three locations, the club serves more than 3,100 Boone County children in sports leagues and summer camps. There are more than 450 students weekly who are in the before- and after-school programs.

“Both clubs have been doing great work in their communities. Due to the continued growth in the area, both boards felt merging the two Clubs would bring more resources to the organization and would be the best option for the future of the youth in our community,” Board President Rob Schein said.

“This reunification is really coming back to our roots,” said Susie McKenna, BGCBC Board Member.

McKenna said a number of sizable donations have allowed the organization to pay off the mortgage on Club West and make some necessary repairs and changes to the building. The second floor is under construction and will soon house a computer lab, library and art room, funded by a Lowes Renovation Across the Nation $50,000 grant and a capital campaign from United Way.

As the cherry on top of an exciting event, Fretz announced that the gym at Club West would be renamed The Holliday Family Gymnasium, for a large donation made by the Holliday Family in honor of the late John Holliday.

Brianna Ramirez was a 2018 Boys & Girls Club Youth of the Year finalist. She spoke at the Be Great Breakfast about her experience at BGCBC and the lessons she learned.

“The first lesson I learned was to accept others,” she said.

Ramirez said she started at the club a shy, introverted girl but with the help of staff she discovered a love for art and an ability to open up to others.

“The club is and always will be my home away from home,” she said. 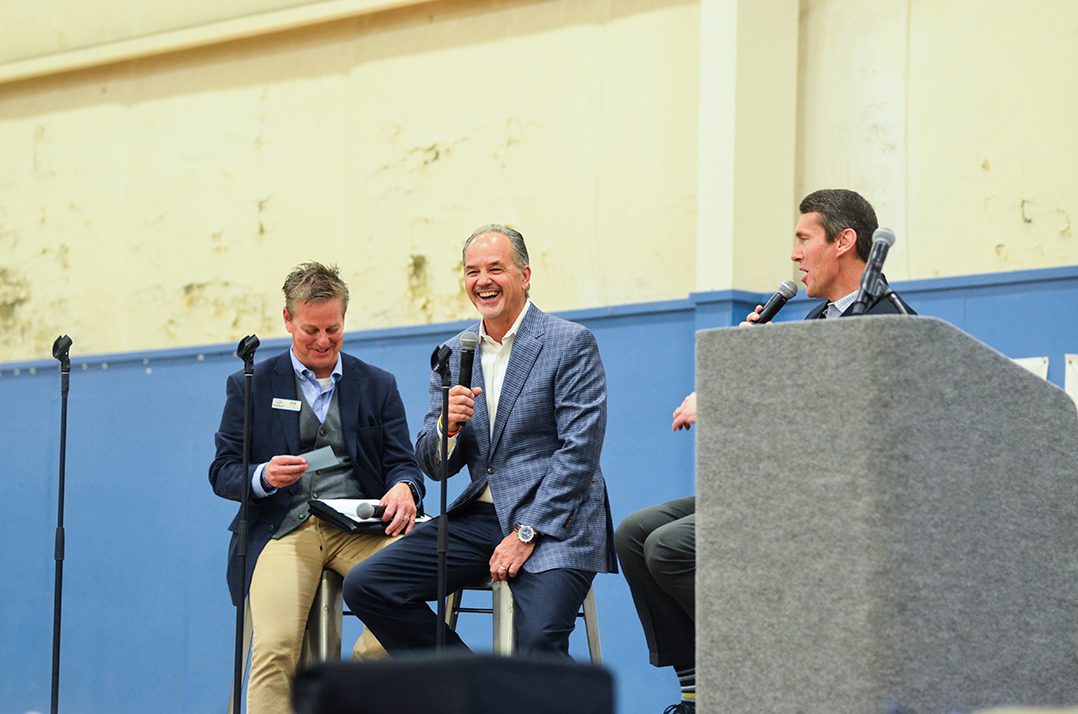 “Paganoisms” at the Be Great Breakfast

Pagano spoke at the Oct. 27 Be Great Breakfast about his battle with cancer, and thanked the Zionsville community for embracing him during that time. He was interviewed by Rich Nye, a sportscaster for WTHR Channel 13, who asked him to explain some of his “Paganoisms”, phrases he was known to use when coaching. Audience members, especially children, were encouraged to write questions on notecards. Many of the questions prompted Pagano to give life advice.