You are at:Home»Current in Carmel»Carmel Community»TCC employees aim for Champion of the Year

Miller is director of human resources for TCC, one of the nation’s largest Verizon authorized retailers. Through her company’s commitment to the Best Buddies jobs program, Zeph was hired as HR assistant. Best Buddies is a nonprofit dedicated to providing opportunities for one-to-one friendships, integrated employment and leadership development for people with intellectual and developmental disabilities. 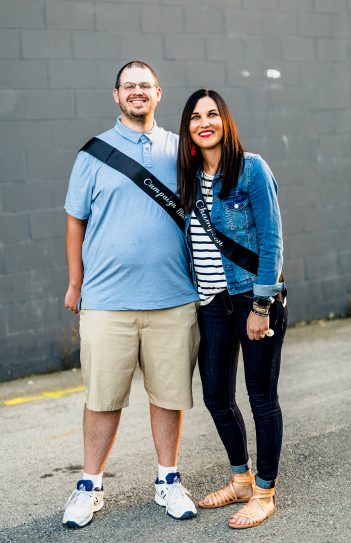 “RJ is such an amazing person,” Miller said. “He’s a great friend and he’s a great worker. I appreciate having him on my team.  He has such a great attitude. I can’t image our team without him.”

Miller was nominated as a finalist for the Best Buddies Indiana Champion of the Year.  The purpose of the eight-week campaign is to raise awareness and funds for Best Buddies. The winner will be announced at the gala at 6:30 p.m. Nov. 10 at the Indiana Roof Ballroom in Indianapolis.

Miller said the friendship has grown since he joined her staff in September 2017.

“I’ve learned a lot from him, and I think he’s learned from me,” she said. “We’ve had a lot of fun doing the Champion of the Year together. We’ve been working to raise funds so they have opportunities just like he has.”

The duo has held some fundraisers, selling T-shirts and collecting auction items for the gala.

“It’s been fun working together as a team, and our friendship has grown,” Zeph said.

“It’s great to see his confidence grow, now he comes right in my office and talks to me,” Miller said. “He’s a social butterfly around the office. He’s made a lot of friends. He’s great to see how much he has grown since being a part of TCC. Our business genuinely cares about him and wants to see him grow and develop.”

Zeph, 32, began his Best Buddies involvement when the nonprofit helped him find the TCC position.

“I wish I had been involved (earlier), because it’s a great program,” Zeph said. “The thing I like most about TCC is how friendly everyone has been.”