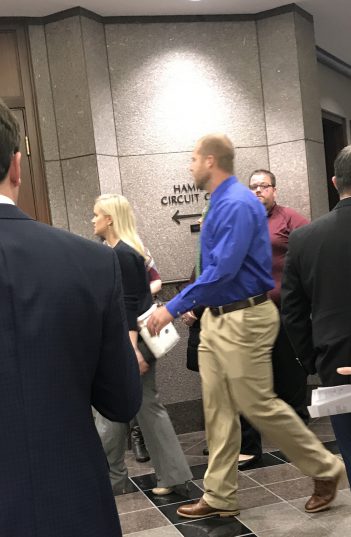 David J. Moore, the alleged May 25 Noblesville West Middle School shooter, is in the midst of his admission and uncontested fact-finding hearing in Hamilton County Circuit Court.

A seventh-grader at NWMS at the time of the shooting, Moore is alleged to have opened fire in his science class after asking to be excused and returning with .22- and .45-caliber handguns. Ella Whistler, a classmate and now an eighth-grader at the school, was shot seven times. Seventh-grade science teacher Jason Seaman was shot three times. Only the .22-caliber was used.

The courtroom is completely full, with many waiting outside in the hallway. Several individuals gave up their seats for Noblesville Schools officials, including one parent whose daughter was in the classroom where the shooting took place. He gave up his seat for NWMS nurse Megan Schlueter, who is credited with saving Ella Whistler’s life and was the first person to give care at the school.

Charges against Moore include:

Parents outside the courtroom said they were more interested in finding out how the shooter got access to the two handguns rather than a motive for the shooting.

This story will be updated as more information becomes known.