You are at:Home»Current in Carmel»Carmel Community»Carmel High School senior to appear on ‘Jeopardy!’ Nov. 9

Carmel High School senior Audrey Satchivi has been a loyal “Jeopardy!” watcher since she was in first grade.

“I really liked the show, but I never really expected to be on the show,” Satchivi said. 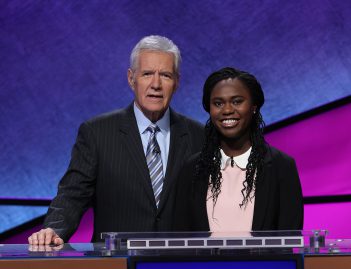 She surprised herself. Satchivi, 17, was selected for the annual Teen Tournament and will appear on the Nov. 9 episode. Game show contestants aren’t permitted to discuss how they did until the episode airs. She said she will likely have a watch party at CHS because so many friends want to watch it with her.

“It was an amazing experience,” Satchivi said. “I got to meet Alex Trebek, which was awesome. He was a really cool guy, very down to earth. He’s the first celebrity I’ve ever met.”

She said her mother pushed her to take the test online.

“I would watch the Teen Tournament and say these questions are easy,” Satchivi said. “She said ‘You know a lot. You should try out and make some money.’ I decided to try it, and I’m happy I did.”

After her online test, Satchivi traveled to San Francisco to audition in the conference room of a hotel. She then got word she was selected and the show was filmed in late August in Los Angeles.

“It was fun because there were a lot of kids like me who love trivia like myself and were willing  to challenge themselves,” Satchivi said. “It was awesome to be in an environment where everyone was kind of like me.”

“I kind of had the motto, ‘you know what you know,’ so there isn’t anything I could cram into my head I wasn’t already aware of,” Satchivi said. “Because it’s trivia you never know what is going to come up, so you can’t really study for it.”

Pop culture is her strength. She keeps up with it on social media and the news.

Satchivi, who hasn’t made a college decision, plans to major in biology and Spanish, She would like to become an anesthesiologist or gastroenterologist and volunteer for a program such as Doctors without Borders.

“I think it would be awesome to use the medical skills I might gain and language skills I have to help the world,” she said.