Where to go: The Den by Foxgardin

What to get: The Carmel Tenderloin

Anna’s take: The Den by Foxgardin is the perfect place to go if you want to sample a little bit of a lot of different items. It is a spin-off of the popular Foxgardin restaurant in Fortville. The restaurant offers four types of sliders, barbeque options, several sides and entrees. I ordered the fried mozzarella, an entrée, a side of fries and the Carmel Tenderloin slider. The fried mozzarella are thick slabs of mozzarella cheese, cut fresh, marinated in house-made,wet batter, tossed in a dry batter, fried and served with homemade marinara sauce. They are what The Den calls “twice-fried,” so they’re extra crispy. 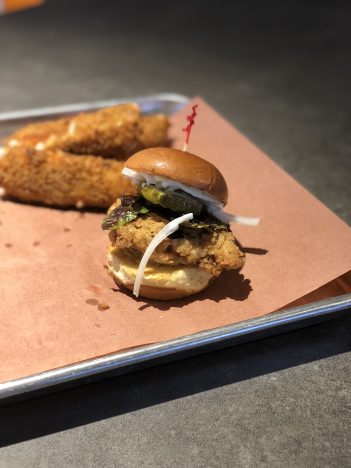 The Carmel Tenderloin is a slider sold a la carte at The Den by Foxgardin inside Sun King Spirits in Carmel. (Photo by Anna Skinner)

My favorite was the Carmel Tenderloin, a miniature twist on a sandwich famous throughout Indiana. It is the size of a slider, making it very conquerable compared to other tenderloins across the city. The tenderloin is actually made out of tenderloin and not the more common ingredient, pork loin. Chef Jake Burgess said the restauran, which has no freezers, t is fast/casual but chef-driven. All sauces are made in-house.

The Den by Foxgardin is one of four restaurants inside Sun King Spirits, a taproom and new distillery just off the Monon near downtown Carmel. Sun King Spirits features the emerging concept of food halls, where multiple eateries with different menus are housed within one establishment. Guests choose their table and a server takes their drink order. Guests then enter the eatery within the food hall from which they wish to order.

Suggested pairings: Burgess said his goal for The Den by Foxgardin is for his food to pair well with any of Sun King’s beers.

“My idea behind my food, here especially, is eat what you want, drink what you want and everything will meld together,” he said.