You are at:Home»Current in Fishers»Fishers Community»Delaware Township Trustee Debbie Driskell runs for re-election

Republican Debbie Driskell has served as the trustee for Delaware Township in Fishers for 28 years and is seeking another term in the Nov. 6 election.

“My No. 1 goal has always been to serve residents with the utmost integrity and success. I hope to continue to be your Delaware Township Trustee for many years to come,” Driskell said. 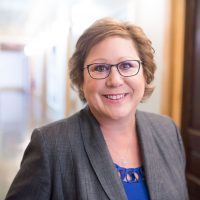 If re-elected, Driskell said she has a three-point plan for her next four years in office. Points include keeping up with technology demands; creating a plan to address challenges associated with the Nickel Plate Trail, which will run alongside the government center; and growing the No More Secrets Campaign, which raises awareness for sexual abuse in children and provides training to adults who work closely with children.

“Debbie is one of the most dedicated individuals I know in serving her community,” McGrath said. “She is constantly looking for new ways to bring people together and to help those in most need.  Delaware Township is lucky to have had Debbie leading as trustee, and I look forward to her continued leadership for Fishers.”