“Where is Sherman” will take on a whole new meaning during the Actors Theatre of Indiana’s production.

Burdette is the feature reporter and producer for “Where is Sherman” on Fox59 Morning News. He checks out new restaurants, shops and events on the morning show. 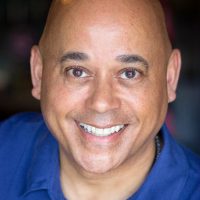 “He’s visible throughout the play, pretty much center stage,” Burdette said. “But he doesn’t have any lines, per se. His dialogue comes mostly through the sound effects, crowd noises, doors slamming, car horns honking, that sort of thing.”

Burdette has been at Fox59 for nine years. His on-air TV career began in 1990. His first TV news role was behind-the-scenes at WISH-TV in Indianapolis in 1982, where he worked as a videotape editor for three years after graduating from Ball State.

Burdette, who has worked as an anchor, reporter, producer, and photographer editor in local TV news, was involved in stage productions at Broad Ripple High School and Ball State. He also did some local commercial work and print modeling in Indianapolis in the 1980s.

“I spent 3 1/2 years as an actor training and auditioning in Los Angeles,” he said. “I had a few minor roles and came close to landing a role in the popular TV series, ‘In the Heat of the Night.’ Recently, I got back into acting through classes at the Indy Actors Academy, working on acting techniques for TV and film. I just finished a small role in a local film production.”

His role at ATI will be his first stage role in many years, he said.

“At this point, I’m planning to continue my on-air duties each morning and get to rehearsals at ATI,” he said “It’s going to be a grind as I usually get up at 4 a.m. for a 5 a.m. call at work, but I’m set on making it work. ‘It’s a Wonderful Life” is an all-time favorite of mine. We watched it every Christmas season growing up.”