You are at:Home»Night & Day»Entertainment News»Humperdinck to make Palladium debut
Born Arnold George Dorsey, he took a new name, courtesy of a manager, that no one ever forgets.
Legendary English pop singer Engelbert Humperdinck will make his first appearance at the Palladium at 8 p.m. Oct. 26 at the Center for the Performing Arts in Carmel. The tour features songs from his 2017 album, “The Man I Want To Be,” which also is one of the songs. 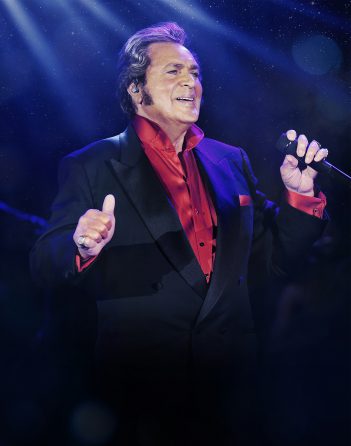 Engelbert Humperdinck will perform Oct. 26 at the Palladium in Carmel. (Submitted photo)

“I think that’s one of the best albums I’ve done in a while because it has a lot of new songs on it,” Humperdinck said. “It’s not doing somebody else’s material and making it your own. It was a different approach for me this time.”

The album includes a slower version of Bruno Mars’ “Just The Way You Are.”
Humperdinck’s new Christmas album, “Warmest Christmas Wishes,” was released this month.
“At the end of the year, I should be releasing a PBS special which I did in Hawaii (this fall),” Humperdinck said.
His concert will include his major hits.
“I can’t do a concert without doing the standards that made it possible for me to be here in the first place,” he said. “It’s a show that has been tried and tested around the world.”
At 82, Humperdinck isn’t slowing down.
“People keep saying to me that you’ve been in the business, are you going to put your feet up or hang your hat up?” Humperdinck said. “I say I don’t even know what that means. I just want to continue until I can’t sing anymore. But I can sing. My voice is as strong as it was when I first started. It hasn’t lost any of its value. When you get older your vibrato gets a little slower, but mine hasn’t. It’s become a very contemporary voice, which I really love.”
Humperdinck performs 80 to 90 concerts per year.
“Each time I walk on stage it’s fabulous,” Humperdinck said. “I don’t think there is a feeling better than being appreciated by the people sitting there watching you perform.”
Humperdinck said he works hard to stay fit. He recently dropped 32 pounds.
“I’m moving better,” he said.
Humperdinck said his fans span a large age range, which has given him longevity.
“If you have one age group, they disappear,” he said. “But with my kind of audience, it’s three or four generations, and it’s just unbelievable.”
Humperdinck made his splash in 1967 with his version of “Release Me.”
“That one song gave me my career,” he said. “It doesn’t happen very often in today’s world.”
The song was No. 1 for six weeks in March and April 1967 in the United Kingdom, keeping The Beatles’ “Penny Lane” and “Strawberry Fields Forever” from reaching the top spot.
“It stopped the Beatles from having their 13th No. 1 (at the time),” Humperdinck said. “This unknown person came along and stopped the almighty Beatles. It’s been a great stepping stone in my life. It was No. 1 around the world and gave me a global career immediately. My style stands out from all the others and it was unusual for a balladeer to come into the charts and remain there and be fortunate to have about $150 million in album sales around the world.”
Some of Humperdinck’s other major hits include “The Last Waltz” and “After the Lovin.’”
His manager Gordon Mills took the name Engelbert Humperdinck from a German 19th century opera composer.
“Mills developed a stable of singers, including Tom Jones and Gilbert O’Sullivan and myself. Between the three of us, he had a pretty good British team of horses,” Humperdinck said. “The only thing I would have liked to have had was a middle initial because it did belong to the man who wrote ‘Hansel and Gretel’ (opera). I would have liked to have the variation. I am a doctor of music. I should put a doctor in front of it.”