Sadie Cohen, a 9-year-old Carmel resident, had no clue what “Fun Home” was about when she first heard of the musical.

Her character, Alison, grows up in a funeral home.

“That’s why they call it a fun home,” Cohen said. “I actually thought it was going to be about a circus. I was wrong.” 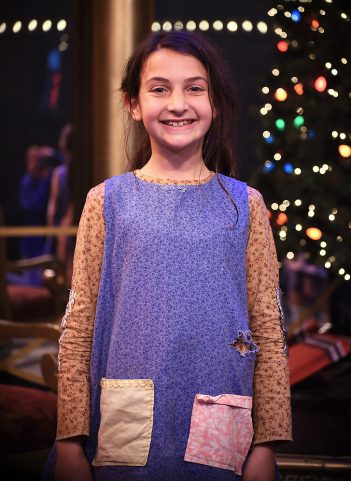 Cohen, a West Clay Elementary fourth-grader, is appearing as a young Alison in the Ball State production of “Fun Home” in Muncie from Oct. 19 to 28. Her mother, Melissa Cohen, has been taking her to rehearsal five days per week.

“Fun Home” is a musical based on cartoonist Alison Bechdel’s complex relationship with her gay father and the discovery of her own sexuality. Her father killed himself a few months after Alison came out as a lesbian.

Alison is played at three different ages in the show.

“She relives her memory when she was 9 or 10 and relives her life,” Cohen said. “It’s really sad (at times) and it’s really hilarious.”

Cohen said there is a scene where Alison and her two brothers are hiding inside a casket. One of the actors playing one of the brothers is Jack Clark from Westfield, who Cohen has performed with at Jr. Civic Theatre. Jack Roberts, Muncie, plays her other brother.

“They all act like real siblings now,” Melissa said. “It’s been a great experience for Sadie. It’s a very serious show and it’s been a challenge.”

Her lines in the show are the most Cohen has ever had to remember. She appeared as Ruby in “Annie” at Beef & Boards during the summer.

Cohen will only have a short break before her next appearance as Young Mary and Zuzu Bailey in Actors Theatre of Indiana’s  production of “It’s a Wonderful Life: A Radio Play” Nov. 16 to Dec. 23 at the Studio Theater in the Center of the Performing Arts in Carmel.