Michael Scherperel is an accomplished composer, pianist, voice coach and author who also has a background in biomedical research.

But that’s not all. 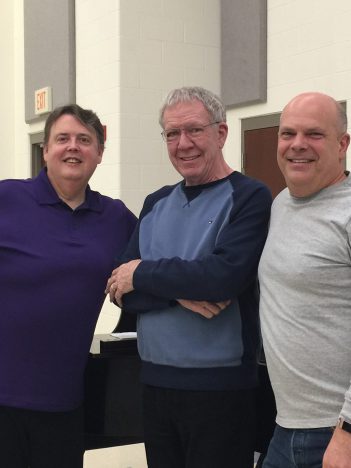 The Fishers resident also is an acclaimed conductor whose skill will be on display Oct. 23 as part of the Duckwall Artist Series at the Butler Arts Center in Indianapolis, 4602 Sunset Ave.

“Music as drama and entertainment, those are my goals as a composer and performer,” said Scherperel, who is the assistant conductor and principal coach for the Butler Opera. “Both of these works are stories, and I would hope the audience would be both aurally and emotionally moved by what they will hear.”

Scherperel has performed previously in the Duckwall Artist Series but has never conducted. He looks forward to his first opportunity, especially since he is conducting his own pieces, “On Hearing of Love” and “Ecgloga bucolica.”

A six-movement piece, “On Hearing of Love” incorporates the poems of Constantin Cavafy and is sung by Worthington, accompanied by string quartet. “Ecgloga bucolica,” set around Virgil’s Eclogue II, will be sung by Schuster, accompanied by flute/piccolo, English horn, violin and piano.

“(‘On Hearing of Love’) traces the course of a man’s life, his loves and his art,” Scherperel said. “The piece was premiered in 2005. The second piece is a setting in classical Latin of Virgil’s second Eclogue, and this performance will be the premiere.”

As his resume suggests, Scherperel is a musical virtuoso who has plied his craft most of his life. He studied composition and conducting at the Eastman School of Music in Rochester, N.Y. and did undergraduate work in piano, composition and conducting at Boston University. He has also been a vocal coach at the American Institute of Musical Studies in Graz, Austria and been a chorus master and assistant conductor with the Greater Miami Opera.

But playing, conducting and writing music isn’t his only skill.

Outside of music, Scherperel has a bachelor’s degree in chemistry from Harvard University and is a former biomedical researcher at Massachusetts General Hospital. He also has authored a novel, “Fair to Middling,” and written a collection of humorous essays, “homo sapiens — obsolescens?”

But music, and conducting, in particular, are his primary passions.

“A conductor is not a time beater. That’s pretty much what a drum major does for a marching band,” Scherperel said. “It is an important role, but on the concert stage or in the theater, the conductor’s job is to keep things going and to adjust as needed for any performance glitches that might occur.

“Cueing can be important in large works, especially where players may have dozens or scores of measures of rest,” he continued. “It’s the player’s responsibility to count all those, but a little reminder from the conductor at the appropriate moment, ‘Hey, it’s your turn,’ can be helpful, possibly even vital.”

A former South Florida resident, Scheperel and his wife, accomplished organist and music teacher Loretta Scheperel, moved to Fishers in 2012 to be closer to their daughter.