You are at:Home»Current in Westfield»Westfield Business Local»Field Brewery to open in October, to offer coffee and beer

After nearly a year of construction, Field Brewing will open next month.

The Westfield restaurant and brewery will open as early as 7 a.m. and offer coffee and breakfast grab-and-go options in the morning. It will transition into lunch in the afternoon, when patrons can order at a counter. It will become a more formal sit-down restaurant for dinner. 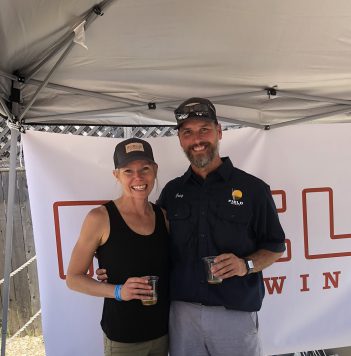 Jackie and Greg Dikos are the owners of Field Brewing, which will open in downtown Westfield in October. (Photo by Anna Skinner)

“Our ultimate goal was to have a faster turn-around, so if you have a faster lunch hour you can move through the line,” Jackie said. “People can get in and out.”

Alan Sternberg, twice-nominated for the James Beard Rising Chef Award, will be the head chef.

“I’m really excited for him. He has the same beliefs we do,” Jackie said. “We won’t be all organic, but we do take pride in great, quality ingredients.”

Sternberg will operate from an open-concept kitchen and will create the menu.

The brewery is split into two separate buildings, because husband-and-wife team Jackie and Greg Dikos have plans for a distillery. To receive a distiller’s license, a brewery must be operated for three years. Separate facilities also are required to operate a distillery and brewery, so the couple created a restaurant with two buildings separated by a courtyard. The east building will serve as the future distillery. It now provides event space and open-concept lounge seating.

The courtyard is covered in artificial turf instead of real grass because spilled beer kills live grass. A garden operated by Green Beard Growers owner Jeremy Callahan will be established in the front of the building along Main Street.

Field Brewing will start off with five beers and mostly likely won’t offer guest taps. The four starter beers are an ESB (extra special bitter), a pilsner, an IPA (India pale ale) and a Kolsch. An American pale beer brewed through a partnership with Center Point Brewing also will be offered.

After the first five, Field Brewing plans to brew a porter, a Maibock and a brown ale.

“There’s a little bit of something for everyone, and we feel like we will still appeal to people who are in the lighter beer audience,” Jackie said.