You are at:Home»Current in Zionsville»Zionsville Cover Stories»Reaching new heights: Moontown brews up six months of success
It seems like a story told time and again — a homebrewer transforms their hobby into a full-scale enterprise. Except this venture was more than a dream or a leap of faith. The folks at Moontown Brewing Company knew what they were getting into, and they hand-picked the people and place that would make it happen. 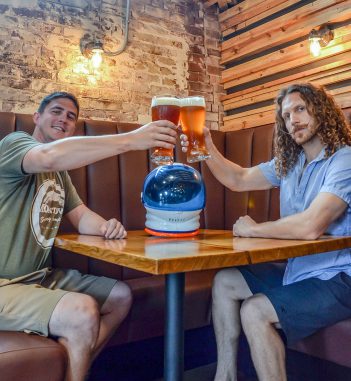 “I can’t even imagine it going any better than it has gone. We are already getting pressured to can beer, distribute and expand,” Moontown co-founder Bobby Mattingly said.

A culmination of several individual aspirations led to the March 2018 launch of Moontown. Zionsville resident and commercial builder, Pete Mattingly, had a passion for homebrew since the early 2000s. His son Patrick inherited his old equipment in 2006 and began brewing with his Purdue University colleague, Cody Peczkowski.

In 2007, Pete’s King of Troy lager was given a perfect score by the judges at the Indiana State Fair Homebrew Competition.

“At that point he knew he was making some good beer,” said Bobby, Pete’s youngest son.

The Mattingly family began brewing together in 2015 as Moontown, and planned to eventually open a full-scale brewery. They began looking at potential sites in Zionsville, Lebanon and Whitestown. Later that year, Moontown won first place in the inaugural Whitestown Beer Fest. Town Manager Dax Norton approached the family after the festival, suggesting they turn a historic building on Bowers Street into a brewery.

“It was structurally sound, but needed a lot of work,” Bobby said.

The town sold the building to Moontown for $1, agreeing to repair a dilapidated roof.

Pete’s company, MattCon General Contractors, began renovations in May 2017. Patrick is project manager for the company and oversaw the Moontown construction. More than a year of restoration included electrical, plumbing and HVAC updates, and the construction of interior walls.

Throughout the renovation process historic elements were preserved, with details such as repainting the basketball court markings and salvaging bleacher seats as wood trim. 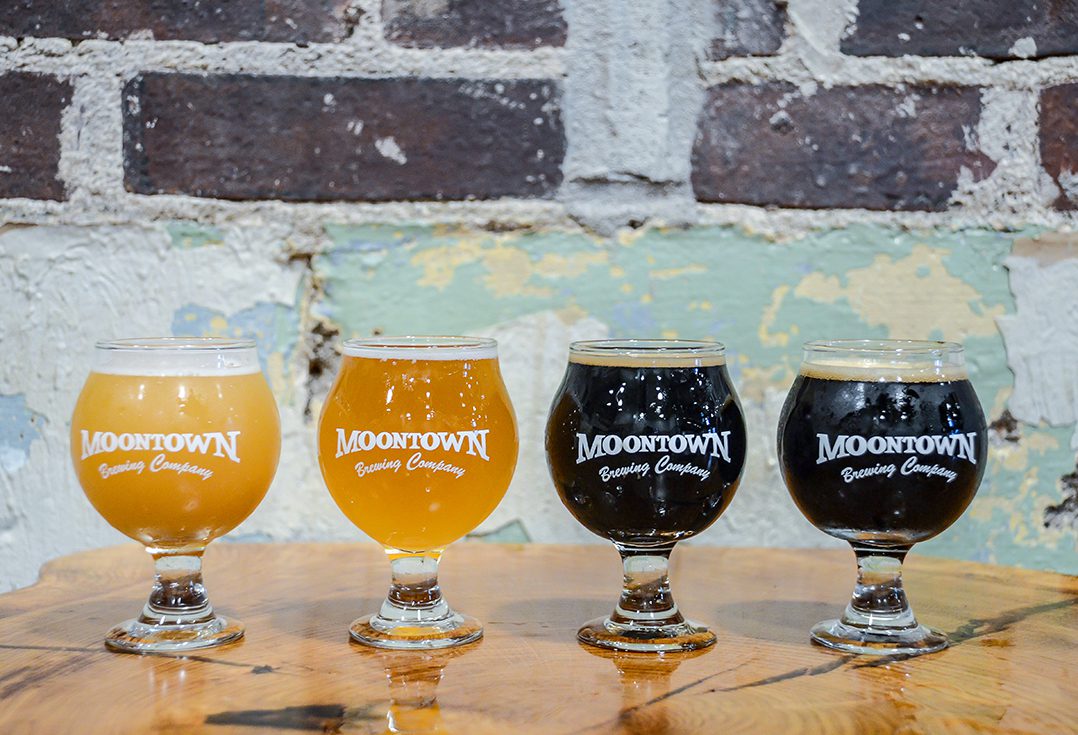 Patrons can order a flight of beers to sample Moontown’s offerings. Pictured from left to right are; Hef- Czowski, a traditional German Hefeweisen brewed from malted wheat; Bam Bam, a fruity pale-meets- wheat beer; Into the Void, a robust porter; and Choco-Dece, a double-chocolate milk stout.

While the brewery was becoming a reality, Bobby and Patrick recruited Peczkowski, who had left a corporate job to pursue his interest in brewing craft beer for Gordon Biersch, a German-style brewery chain. Moontown made Peczkowski an official offer mid-2017. That same week, Gordon Biersch announced it was closing Peczkowski’s location.

“The timing all lined up too perfectly,” Peczkowski said. 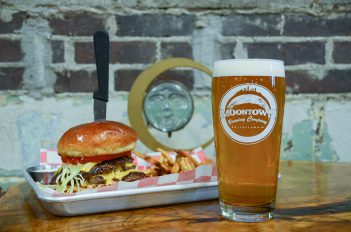 Moontown Chef Dave Slama recommends pairing the classics for the ultimate Moontown experience. Pictured are the All-American Burger, featuring a triple beef patty and a side of fries, with King of Troy, a crisp lager made with German malt.

Sourcing ingredients locally is important to Moontown. In a tall silo outside the building, malt from Sugar Creek Malt in neighboring Lebanon is stored. It is not only used in brewing, but also in flatbreads and breading, after being ground to a flour.

Also on the team are Samson Corrado, who attended both ZCHS and IU with Bobby, and Georgia Rheinhardt, who Bobby met at IU. With her experience managing events at Traders Point Creamery, Rheinhardt was the perfect person to take on the role of marketing and events manager.

“The quality of the people involved has made all the difference,” Peczkowski said. “This was not a whim and a hope.”

Oktoberfest will take over Moontown Brewing Company’s entire facility on Oct 6 from noon to 11 p.m. The day will consist of beer tappings, two live concerts, a German costume contest and more. To purchase a ticket visit moontownbeer.com/oktoberfest.

2003 – Pete Mattingly began home brewing. The first beer he brewed was King of Troy, a lager named after his grandfather’s hometown of Troy, Ind.

2006 – Patrick Mattingly and Peczkowski began home brewing while living in Lafayette and attending Purdue University. The first beer they brewed together was a porter called Into the Void, using hand-me-down equipment from Pete.

Jan. 2015 – Samson and Bobby moved back to Indiana from Miami. Bobby asked his father, Pete, to teach him more about home brewing. Moontown became a brewery-in-planning.

April 2016 -Peczkowski moved to Kansas City to help open a Gordon Biersch location. Soon after, Bobby and Pat visited Peczkowski to recruit him for Moontown.

May 2017 – Construction began on the Bowers Street historic site after finalizing a re-development deal with Whitestown. 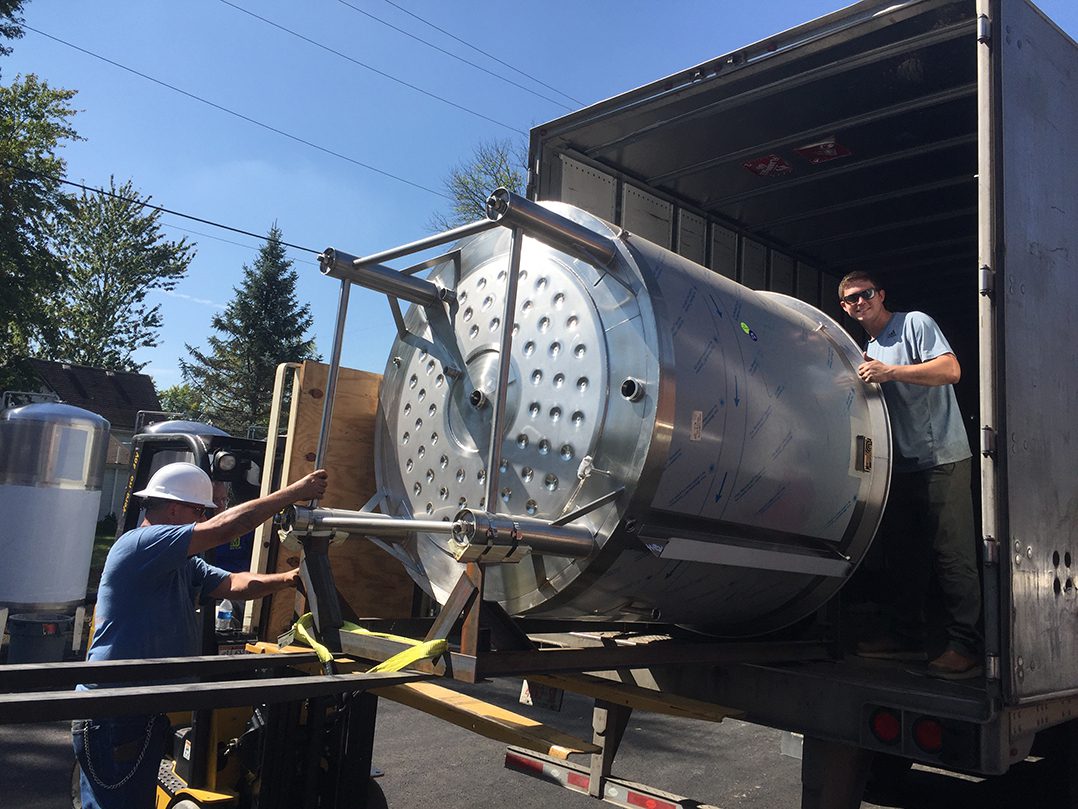 Bobby Mattingly unloads the brewing equipment on a hot summer day in 2017. “We worked through the night and brought everything in one piece at a time,” Bobby said.

Sept. 2017 -Peczkowski moved to Indianapolis to become a partner at Moontown. The brewing equipment arrived soon after.

Dec. 2017 – The Moontown crew brewed King of Troy for the first time on the new equipment. It was the first legally brewed beer in Boone County since the repeal of Prohibition