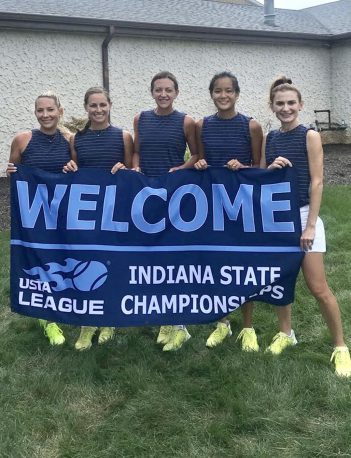 Team captain Katy Rhinehart said she founded the team after playing in a summer recreational league.

“Some of us had just picked up a racket in the last two months, so I formed a group of friends to have fun matches and started getting competitive,” she said. “Then this past spring, there became interest in joining a 2.5 team at the Bridgewater.”

The format for USTA’s 2.5 leagues is one singles match and two doubles matches.

“A lot of us are moms with young kids, and there are very few sports with women outside of high school and college,” Rhinehart said. “Besides golf, tennis is the obvious choice to merge exercise, social and fun together.”

During the Midwest sectionals, the team was undefeated but lost the overall sectional championship to a team from Illinois.

Rhinehart said the team originally started practicing once a week but pracited every day toward the end of summer.

“It was a really emotional season but in a good way,” she said. “Never in a million years would we have thought we would have such an incredible season.”

Rhinehart said the team improved dramatically throughout the season.

“To have women play their heart out on the court was inspiring,” she said. “We started something for all of us that will last a lifetime.”

The team plans on returning again for next year’s tournament.