You are at:Home»Current in Westfield»Westfield Community»Huston Electric wins Lantern Award, others recognized

Westfield residents were able to vote on the recipient of the Lantern Award leading up to the Westfield Chamber of Commerce event Sept. 7 at the Palomino Ballroom in Zionsville. The winner, Huston Electric, was announced during the Lantern Awards event. The other Lantern Award nominee was Grand Junction Properties, operated by Bob and Michelle Beauchamp. 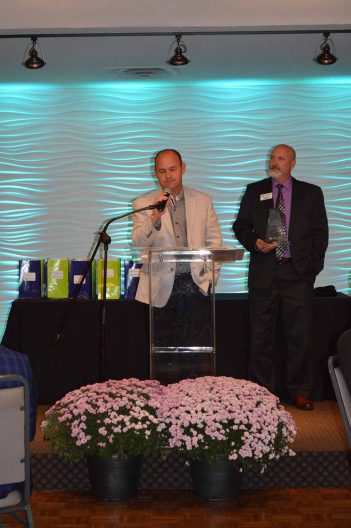 Corky Huston speaks as Rob Garrett, president of the chamber’s board of directors, looks on. (Submitted photo)

To be nominated, businesses have to enhance the Westfield community in significant and noticeable ways. Huston Electric has offices in Westfield, Lafayette and Kokomo. It has been family owned for 79 years and most commonly works with electrical contracting. It also has specialty divisions in telecommunications, phone systems, custom signs and lighting, generators and compressors and other technologies.

Managing Director of Sales and Service Corky Huston accepted the award and spoke following the announcement.

“We are very humbled and honored to be named the award winner for this evening,” Huston said.

Huston called Park Street, an effort accomplished largely by the acts of the Beauchamps, an inspiration.

“We are very blessed to have landed in Westfield and to have been accepted into this great community,” he said.

“I’ve been in this position very shortly and reached out to the chamber board members and this is the consensus among (Keinsley’s) peers,” Verhoff said.

Keinsley spoke on her involvement with the chamber board.

“I love this community and I love what I do,” Keinsley said. “I just love all the people and being in Westfield.”

Other winners on the evening were:

“What we didn’t realize was the bond we would receive in return,” Seagrave said. “I think it’s a real indication of what this community is all about.”