In February 1861, president-elect Abraham Lincoln, traveling by train, made an unplanned stop in Zionsvilles during his Whistle-Stop tour. He was on his way to his inaugruation in Washington, D.C. The site, known today as Lincoln park, was established to commemorate the event.

Although only a half acre in size, the park and gazebo are among Zionsville’s treasured historic sites. Yet, some residents have felt that the park, managed by the Zionsville Parks Dept, hasn’t received adequate care in recent years. 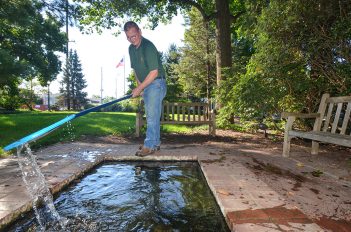 Jeff Bennington, Zionsville Parks Dept. tech, scoops leaves from a water feature in Lincoln Park. One of the feature’s two fountains no longer works, but Bennington drains and refills the small pond once a week. “I come here every day to empty trash cans, pull weeds, water the ferns and clean the fountain,” Bennington said.

Among concerns are dense, untrimmed trees and bushes; the lack of grass and flowers in certain areas; and drainage issues creating the beginning of a trench through the park and pooling around spli- rail fence posts, established to give a nod to Lincoln’s roots.

Zionsville resident Ralph Stacy voiced his concerns during a town council meeting in late 2017 when he questioned the town budget.

“We’re in the midst of a massive expansion of the town and we’re having trouble maintaining what we already have,” said Stacy, whose house overlooks the park.

Stacy cited the town’s master plan from the 1980s when a growth-control ordinance was passed.

“You bring so much along as you can afford it,” Stacy said.

After the meeting, Stacy reached out to town representatives to address specific concerns. He has seen an improvement but feels there is still work to be done.

The Stacy family and other residents revitalized the park after World War II when it was crumbling, and still feel responsible for its appearance. 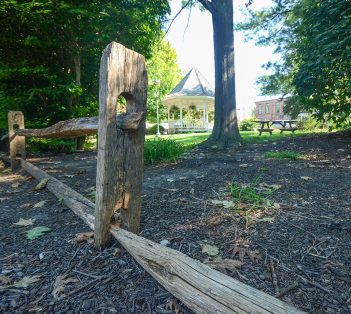 The split-rail fence around Lincoln Park is broken in several spots. A potentional redesign of First Street would impact sidewalks and the fence surrounding the park, so no changes will occur to the perimeter of the park until the street plan moves forward. (Photos
by Sara Baldwin Schatz)

Non-professional plantings in past years may have created part of the issue, according to Matt Dickey, Zionsville parks director.

“To some degree, I’m not sure (initial trees and shrubs) were thought about, what came in and where it went,” Dickey said.

Because Lincoln Park frequently hosts weddings on weekends, Dickey said he asks brides what they like about the park. Usually, it’s the dense vegetation creating privacy from the street.

The increased shad, however, has impacted areas of the park, preventing daylilies and knockout roses from blooming and hostas and grass from growing.

Parks Board President Jeff Edmondson appreciates the efforts residents like the Stacys have made and said the park is a priority in the Town of Zionsville Five Year Parks Master Plan, which was approved earlier this year. Individual improvements must still be approved by the town council.

“(Stacy has) put hours into (Lincoln Park) and that’s some of his legacy,” Edmondson said. “He didn’t have to sell me. It’s seen by hundreds of people every day.”

Specifically, the plan proposes several improvements to the park, including a new perimeter fence, replacing the existing electricity, including conduits, and routine maintenance to provide park upkeep.

The park has a wood perimeter fence which provides some protection to the park by limiting points of access, but it mainly serves an aesthetic purpose. The plan proposes replacing the fence with a metal, decorative fence to upgrade the aesthetics of the park and lower maintenance needs.

The overall goal is to refresh the park, according to Edmondson and Dickey, with long-lasting versus temporary results.

“No decisions have been made,” Edmondson said. “That’s part of the process.”

Dickey added that every park has a different objective but most Zionsville parks are designed to have a natural feel because of location and expense for upkeep. Of the 400 acres managed by the Zionsville Parks Dept., 57 percent were donated, and topography dictates whether the park can have a more manicured appearance.

Contributing to some of the challenges with upkeep is staff. Zionsville Parks Dept. has three full-time maintenance staff after adding a certified arborist two years ago. Mowing is through contracted companies, and some maintenance, such as tree removal, is completed with assistance from the Zionsville Street and Stormwater Dept.

Mayor Tim Haak said that as new parks are added, the staff will need to grow in the next few years.

According to Haak, there may be a larger plan for First Street in the future, depending on other downtown development. The redesign of First Street would impact sidewalks and the fence surrounding the park, so no changes will occur to the perimeter of the park until the street plan moves forward.

People calling for more upkeep at Lincoln Park say the location makes it an important draw to visitors and locals, and therefore should be a priority.

“There is a strategy behind why we do things,” Edmundson said. “You cannot satisfy everybody, so you’re trying to do the best you can, but mostly approach it from a professional standpoint, (asking) ‘What’s the right thing to do?’” 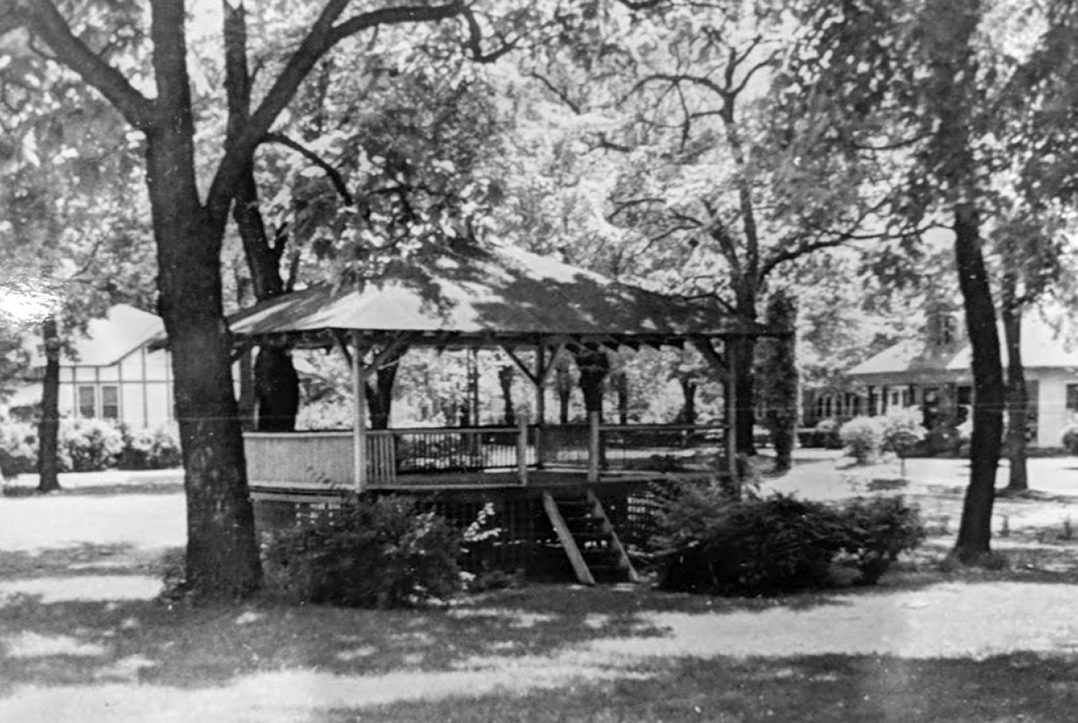 The Park’s Unusual Past

In 1861, President-elect Abraham Lincoln was headed to Washington, D.C., for his inauguration. The train wasn’t expected to stop in Zionsville, but the engine needed water, so Lincoln spoke briefly to a waiting crowd late on February 11 from the back of the train at the station.

Although there’s no record of what he actually said, it was reportedly brief and ended with the sentiment that while he appreciated the people who came to hear him speak, he didn’t want to be late for the party. He passed through again in 1865 on the way to his funeral.

The area around the train station eventually became a municipal park spanning several blocks and had a tennis court. It was initially known as Depot Park, although some records refer to it as Zion Park or City Park.

In 1936, on Flag Day the Lions Club erected a stone commemorating Lincoln’s stop.

During World War II, the park was no longer a town priority. The bandstand, added decades earlier, was crumbling. In 1944, it was sold and removed. Finally, in 1952, during Zionsville’s centennial celebration, the Women’s Club spearheaded a redevelopment of the park. It was renamed Lincoln Park and residents brought trees, shrubs, bulbs and fertilizer for revitalization.

The Kiwanis Club and other residents helped maintain the park for several decades.

In 1961, half of the park containing tennis courts was sold to build a new post office, now an F.C. Tucker realty office. The other half was in danger of becoming a parking lot, but the Town Board of Trustees voted narrowly to instead establish Lincoln Memorial Park as a historical monument. At the time, residents urged the town to ensure an adequate maintenance budget for the park.

The gazebo was donated to the town in 1986 after it appeared in the Indianapolis flower and patio show.

In 1998, the park underwent a renovation, which included new brick walkways and landscaping, with assistance from the Rotary Club.