For Matt Arnold and Lizzie Barker, it isn’t a leap of faith.

They are certain Indiana University Dance Marathon participants who skydive are raising awareness about Riley Hospital for Children.

Arnold and Barker, Carmel residents and Indiana University juniors, are the outreach co-chairs for the hospital relations committee of IU Dance Marathon.

As part of their outreach, they help arrange a skydiving event twice a year. The next event, hosted by Skydive Indianapolis, is set for Sept. 28-30 in Frankfort.

IUDM participants use the event to raise funds on their personal pages for the Nov. 2 event.

“Everyone is super passionate about raising money for Riley,” said Arnold, a 2016 Brebeuf Preparatory School graduate. “People who do the skydiving are able to reach out to people they are seeking donations from and are able to say, ‘This is out of my comfort zone, but I’m doing it to raise awareness.’ It’s tough to jump out of a plane, but the bravery involved in that is nowhere near what the kids at the hospital have.”

The skydivers each have a teddy bear, wrapped in plastic, strapped to their chest. The teddy bears, supplied by Canopies for Kids and dubbed “The Bravest Teddy Bears in the World,” are later delivered to children at Riley with a message from each skydiver. 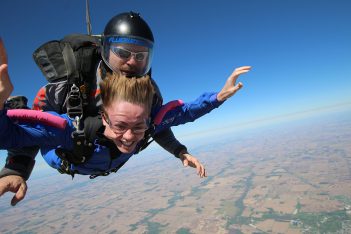 “We try to educate people of where the money is going and do events like the skydiving,” Arnold said. “There is another subcommittee within our committee that does events like Ronald McDonald House meals and Neonatal Intensive Care Unit baby showers once a month and interacts with the hospital more directly.”

This month, Arnold will skydive for IUDM for the third time, having previously participated the past two springs.

“I had a blast with it. It was a unique experience, especially the first time I did it,” he said. “It’s a lot to take it on once. When you are 13,000 feet up in the air, it’s hard to wrap your brain around when you are looking down. It’s like, ‘Wow, that’s a long way to the ground.’ The part that was really getting to me is we were flying in the plane and we weren’t going to land in it. Every foot higher we climbed in the sky was a foot that we would be falling.”

After five to 10 minutes in flight, Arnold said he thought they would jump because they were already so high up.

“But it was still another 10 minutes or so we were climbing in the sky,” Arnold said. “I really enjoyed the second time because the first time there was so much stimuli, it was hard to process what was going on. The second time I was able to relax and really take it all in.”

Barker made her skydiving debut in the spring and will go again this month.

“I was definitely nervous, but it’s something I always wanted to do, especially being a chair for the event,” the 2016 Carmel High School graduate said. “It’s easier if you have done it before to explain it to other people and get them to do it as well.”

Barker said there are approximately 40 participants in the spring and typically more than 100 in the fall.

After dancing her freshman year at IU, Barker joined the hospital relations committee as a sophomore. She participated in Dance Marathon her two years at CHS. She previously attended school in Argentina, where her father was working. 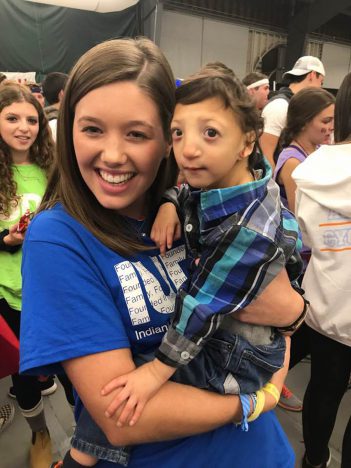 As a freshman, Arnold participated in the dance marathon with other members of his fraternity, Sigma Phi Epsilon. Arnold was moved when families got up to speak.

“Every hour or so families or kids that were in the hospital tell their Riley story and talk about how the hospital positively affected them and how money IUDM raises helps the families” Arnold said. “That’s what the spark was for me, so I joined the development committee where you get matched up with a Riley buddy and you hang out at different events through the year. My buddy was the sweetest little kid with a great imagination. Just to see his joy for life in the midst of everything he’s been through really inspired me to give more effort this year.”

The 36-hour IU Dance Marathon will begin at 8 p.m. Nov. 2 and continue through 8 a.m. Nov. 4 at the IU Tennis Center. To learn more or make a donation visit IUDM.org.