Where to go: Joe’s Next Door

What to get: Debris Po’ Boy

Anna’s take: Joe’s Next Door is an extension of Joe’s Meat Market in downtown Carmel. The business is cross a between a deli, local grocery and meat and seafood market. Joe’s Next Door offers hot and cold sandwiches with deli-style sides sold by the pound. I ordered the Debris Po’ Boy, a fusion of a traditional New Orleans po’ boy with spicy remoulade and seasonings with Indiana beef braised with a strong IPA called All Day IPA from Founders Brewing Co. A 5-ounce. portion of the braised beef is sandwiched between two airy slices of French batard bread and topped with sunshine yellow heirloom tomatoes, pickled red onions and romaine lettuce. A garlic aioli is smeared on the bottom slice of bread. Remoulade is smeared on the top slice. The bread is toasted on the bottom to add a nice crunch, but it maintains its airiness throughout. The New Orleans-style remoulade is gives the sandwich a hearty kick of heat. Those with a more sensitive palette can request less remoulade. The sandwich is wrapped in foil and served hot. 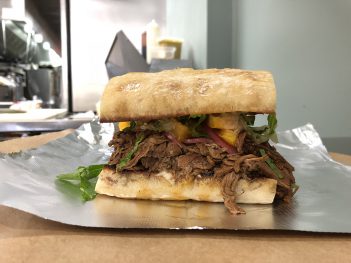 The Debris Po’ Boy is a Midwestern twist on a New Orleans favorite. (Photo by Anna Skinner)

Joe’s Next Door is the perfect place to grab a couple of the cold sandwiches and items from its fresh market and head to a local park for an afternoon picnic.

Suggested pairings: A side of the cold street corn salad ($7.99 a pound) pairs excellently with the Debris Po’ boy. The corn salad is similar to elote, or Mexican street corn, but less messy because it has already been shaved off the cob. The salad is a creamy mix of sour cream and sweet corn, which pairs well with a little spice from diced jalapenos. Other ingredients include bell pepper, red onion, cilantro, cumin and paprika. Since the Debris Po’ boy beef is braised in the craft beer, pair the sandwich with a bottle of the IPA, also sold at Joe’s Next Door.