A Hamilton Southeastern High School sophomore at the the time, Ruiz broke his nose and multiple bones in his face while attempting a double front flip on a trampoline at a New Year’s Eve overnight event, a traumatic injury for anyone.

But for Ruiz, the stakes were high. A top student at Carmel’s Adamson Karate, he had his sights set on competing in the world championships in June. 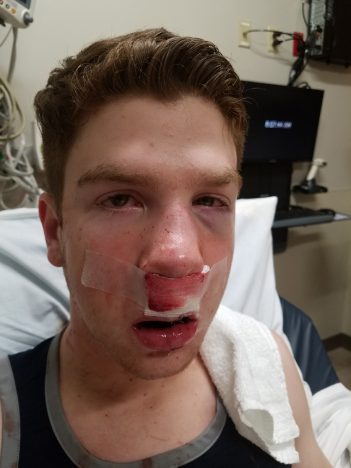 Gabe Ruiz broke his nose and several bones in his face when he attempted a double front flip on a trampoline at a New Year’s Eve overnight event. (Submitted photo)

“It freaked me out, because I knew I was going to be out (of karate),” Gabe said. “At first I tried to get up and walk it off, but then I walked past the mirrors on my way to the bathroom and realized I’m not walking that one off.”

Ruiz saw missing gums and teeth moved to where they shouldn’t have been. He suffered a broken jaw, a broken orbit and broken nose, among other injuries.

His father, Jim, who works as a nurse, was startled by the severity.

“I kept trying not to panic over the realization that he could’ve just as easily been dead or paralyzed for life or been any number of horrific things,” he said. “Breaking his face was the least traumatizing outcome of what could’ve happened. I kept telling myself over and over that that was the luckiest day of our lives, by far.”

Ruiz, now 16, had his jaw wired shut for two months, crushing the high hopes he had for the big upcoming competitions.

But he wasn’t alone.

As Ruiz recovered from his injury, he was joined on the sidelines by Caleb Adamson, another top student at the dojo and grandson of its founders. Adamson broke his leg in a June 2017 skimboarding accident and suffered multiple setbacks as the wound didn’t properly heal. He had five surgeries before receiving medical clearance to begin competing again in mid-January.

At the time, it looked like two of the top three students at Adamson’s Karate would miss the biggest competition of the year. But their years of hard work in the dojo had developed them into fighters, and they shocked everyone with their speedy recoveries.

Ruiz got the green light to begin competing again in March and returned to training without trepidation.

“He had no fear of getting a shot to the face again,” Jim Ruiz said. “It was odd.”

During his first comeback competition, Gabe took a brutal hit that resulted in a bloody nose, but it didn’t faze him. Meanwhile, Adamson said he returned faster and stronger than before his injury.

Both teens qualified for the World Union of Karate-Do Federations competition in June in Dundee, Scotland, and became laser-focused on training in the few months they had to prepare for their trip overseas. 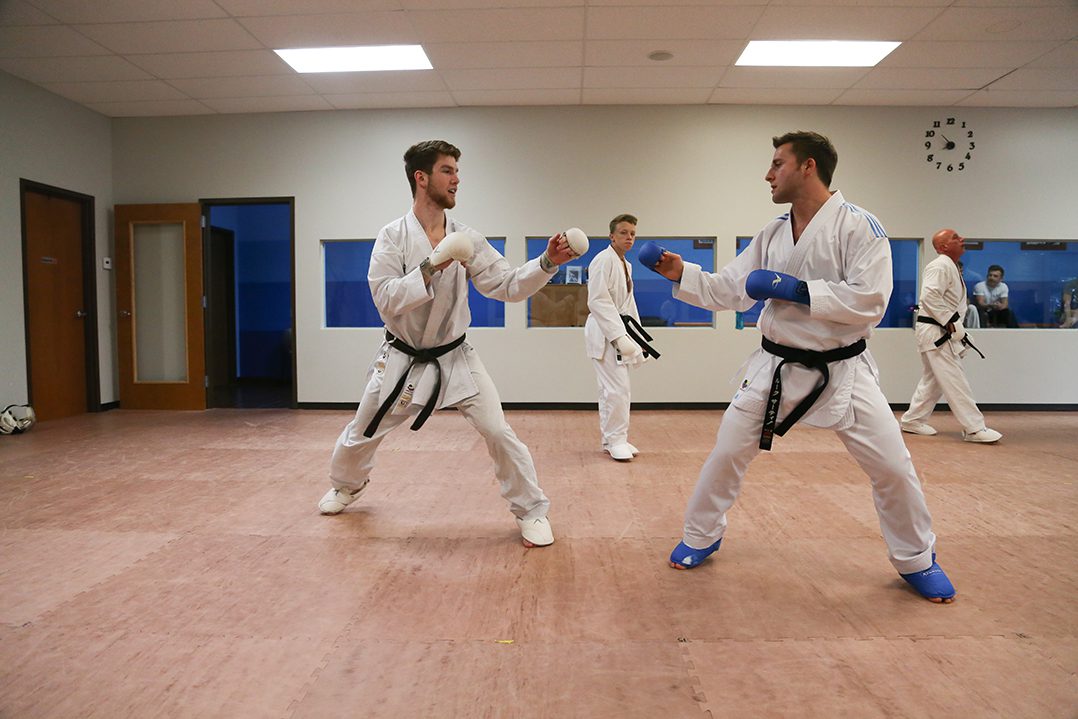 Ruiz and Adamson were thrilled to reach their seemingly unattainable goals of competing at worlds, but for their parents, it was a bit nerve wracking.

“I was terrified when we finally went to Scotland because I was scared to death he was going to have put in all that work (to get back) and not perform in a way that validated his effort,” Jim Ruiz said.

But those fears were unfounded. Both boys finished on the medal stand. Ruiz won individual silvers in kata and kumite after a dramatic comeback in one of the fights, and Adamson won his first international golds in individual kata and team kumite for his age group.

“You’d pay great money to have your son’s confidence built in the way that our son’s was, and we had no idea or guarantee of the outcome,” said Heather Adamson, Caleb’s mother, who coached her son in one of his events. “To see that happen was a beautiful moment. I cried.”

Now, months removed from the many surgeries, it’s hard to see the trauma that shaped Ruiz and Adamson by looking at them. They’ve both matured through the process and learned some lessons along the way.

“You can come back from anything,” Ruiz said. “And don’t do anything really stupid right before you go to the world championships.”

As Caleb Adamson and Gabe Ruiz prepared for the karate world championship, they found inspiration and encouragement from the third member of their team.

Like Caleb, Luke Sartino, 22, has been a student at Adamson’s Karate since he was barely more than a toddler. He’s known Caleb his whole life and has watched him grow from a kid who hung around the dojo into one of his sparring partners.

When Sartino was a freshman at Brebeuf Jesuit Preparatory School, he injured his knee playing soccer and spent the next two years suffering multiple setbacks and four surgeries on his long, frustrating road to recovery.

Now, the Carmel native is an Olympic hopeful, and his story gave Ruiz and Adamson hope as they rehabbed.

“I tried to convey to them that I went through a very similar thing,” Sartino said. “They took that to heart.”

Sartino said it hurt to watch his friends and training partners struggle with being sidelined, but he encouraged them to not rush back to the mat before their bodies were ready. He was thrilled to see them succeed at worlds.

“It was awesome. They totally deserved it,” Sartino said. “I’m lucky I get to train with them several days a week. It’s been fun for me. I feel like I’m helping the new generation while they’re helping me accomplish my goals.”