When Sophie Quick heard the theme for the upcoming Zionsville Fall Festival, “Be a Superhero,” she thought of her personal superhero, Auschwitz survivor Eva Kor.

Kor was subjected to human experimentation at an Auschwitz concentration camp during World War II and received international attention in 2017 when she publicly forgave the Nazis for the horrific events they put her through. 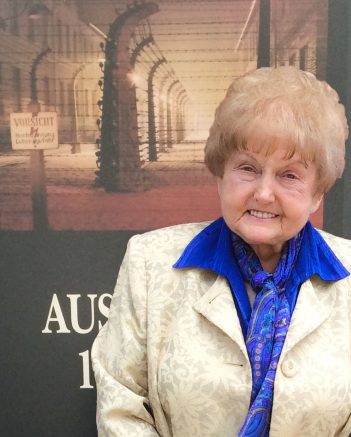 Quick, a Zionsville Community High School student and member of Girls Scout Troop 04487, is earning her Girl Scout Gold Award, the highest award in Girl Scouts, by bringing Kor to speak in Zionsville Sept. 26. The Gold Award challenges Girl Scouts to use their vision for change and to make the world a better place, locally or globally.

“Recent local events have shown that violence is not just widespread but can be centered close to home. I wanted to bring (Eva) here to spread her message,” Quick said. “She makes the world a better place. She spreads her message of hope, healing and humanity throughout the country and the world.”

Kor, 84, travels the world giving speeches. On Sept. 26, she will speak at the ZCHS Performing Arts Center. ZCHS students and seventh- and eighth-grade students will gather to hear the talk. Later that evening, she will speak at Zionsville United Methodist Church.

To promote the event, Quick will distribute cards during the Fall Festival Parade. The cards have information about the event on one side and Kor’s bio on the other.

“I’ll be walking in the parade with the Girls Scouts, handing (the cards) out. Then I will walk around Fall Festival handing them out there,” Quick said.

Quick is confident Kor’s message will positively impact the community, and it just happens to fit with the Fall Festival’s superhero theme.

“Eva is a real superhero. She’s done so many great things,” Quick said.