You are at:Home»Current in Carmel»Carmel Business Local»Carmel attorney honored for leadership in Latino community

Carmel attorney Enrique Flores was among six Indianapolis-area attorneys and one judge to be honored Aug. 30 at the Indiana State Bar Association’s annual luncheon. 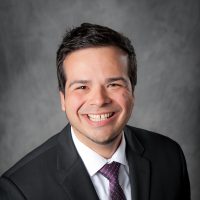 Flores, who resides in Irvington but has practiced law in Carmel for nearly five years, received the Trailblazer/Abriendo Caminos Award sponsored by the ISBA Latino Affairs Committee. The award recognizes the outstanding achievements and leadership of a lawyer who has paved the way for the advancement of other Latino attorneys and/or the Latino community.

In addition to practicing at Wagner Reese Law Firm, Flores volunteers at the Mexican Consulate, where he takes on pro bono cases on behalf of immigrants.

“When I volunteer at the Mexican consulate, I give free consultations and work with helping Mexican citizens in Indiana,” Flores said. “The people I work with all have different questions, anything from a cut on their finger at work to, ‘I lost a foot in a construction accident.’ Sometimes it’s basic questions about consumer rights since they don’t know where to turn.”

Flores said he is passionate about guiding other members of the Hispanic community who want to practice law.

“I talk to people wherever I can, and I don’t think it’s ever enough. I am part of the American Bar Association’s Pathways to the Profession, which pairs minority alumni from the Robert H. McKinney School of Law at Indiana University with current students who wish to go into law,” he said. “I want to make it easier for the next generations, because I stumbled into law, in all honesty. I want to tell these students that someone with a background like mine can make it.”

Flores also credited the Wagner Reese firm and his wife, Rosie, with supporting him in his work.

“I don’t think I would have received that award without them,” he said.