You are at:Home»Current in Carmel»Carmel Education»Carmel High School girls basketball coach ‘quite a ways off’ from returning to role

After Kevin Sweeney suffered a devastating back and neck injury when slammed to the ocean floor on vacation in the Dominican Republic, he was definitely in need of a lift. 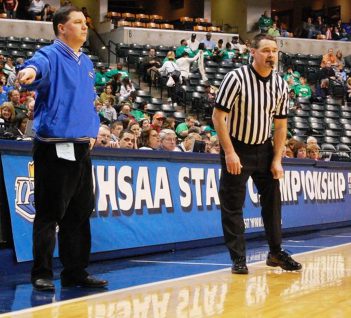 Sweeney, who was named Carmel High School girls basketball coach in May, and his family got a larger boost than they could have ever expected.

“The Carmel community has been amazing,” said Sweeney, a Carmel resident. “The letters and cards I’ve received, the help with meals for our family, support from the church communities and leadership, it’s been unreal how supportive everybody’s been. Friends, family, people I have never met, have gone out of their way to help.”

A GoFundMe campaign was set up for Sweeney and more than $60,000 has been raised of the $75,000 goal to help with medical bills. Medical insurance did not cover the expensive flight from the Dominican Republic to Indianapolis for surgery.

“My wife has been unbelievable during this entire ordeal,” he said. “She has been so supportive, strong and encouraging while maintaining a normal life for our boys.”

Sweeney is the director of operations and finance for St. Elizabeth Seton Catholic Church and part-time church administrator for Carmel United Methodist Church. He said surgeons believe he will be able to perform office work in the near future but hasn’t been cleared yet.

However, he said the prognosis for coaching and physical activity is a different story.

“The way I like to coach, the physical dedication and demands that it takes for a program like Carmel, and the involvement that the players should expect from their coach, all the scouting, I think I am quite a ways off from those expectations,” said Sweeney, who previously coached girls high school basketball at Bishop Chatard and Lawrence North.

On July 31, Sweeney was in the ocean with four of his sons while his wife and youngest son were on the beach.

“A large wave caught me from behind and lifted me, slamming my forehead into the ocean floor,” he said. “My arms immediately went numb and unresponsive, pain shot through my neck and into my shoulder blades and I was not able to keep myself standing. I knew I was hurt and was in trouble. I was briefly able to lift my head to call to my wife. By the time she got to me, I was underwater and not able to get help myself. As it turned out, I broke my C3, C5, C6, C7, T2 and T3 vertebrate. She and two of my sons got me out of the ocean and to the beach.”

Following surgery, Sweeney said the doctor said there was more damage than the MRI indicated.

“There was evidence of trauma and blood in the spinal column,” he said. “They removed two discs and fused C5, C6 and C7 together. The other vertebrae were left to heal on their own. With the types of injuries incurred, not having paralysis, I am lucky. I still have numbness/tingling in my right arm and hand and pain in the neck and back areas. I will remain in my neck brace for three months.”