You are at:Home»Current in Westfield»Westfield Cover Stories»From the ground up: WWS breaks ground on renovations to intermediate, middle schools

Students and staff returned to a different educational environment on the first day of school last month with major construction upgrades to Westfield Middle School and Westfield Intermediate School under way.

WWS Director of Operations Joe Montalone said the district secured costs approximately 5 to 8 percent under the proposed bid amount. Bidding began earlier this year for WIS and WMS.  Montalone emphasized the district is doing everything it can to minimize potential noise from construction during classroom time. 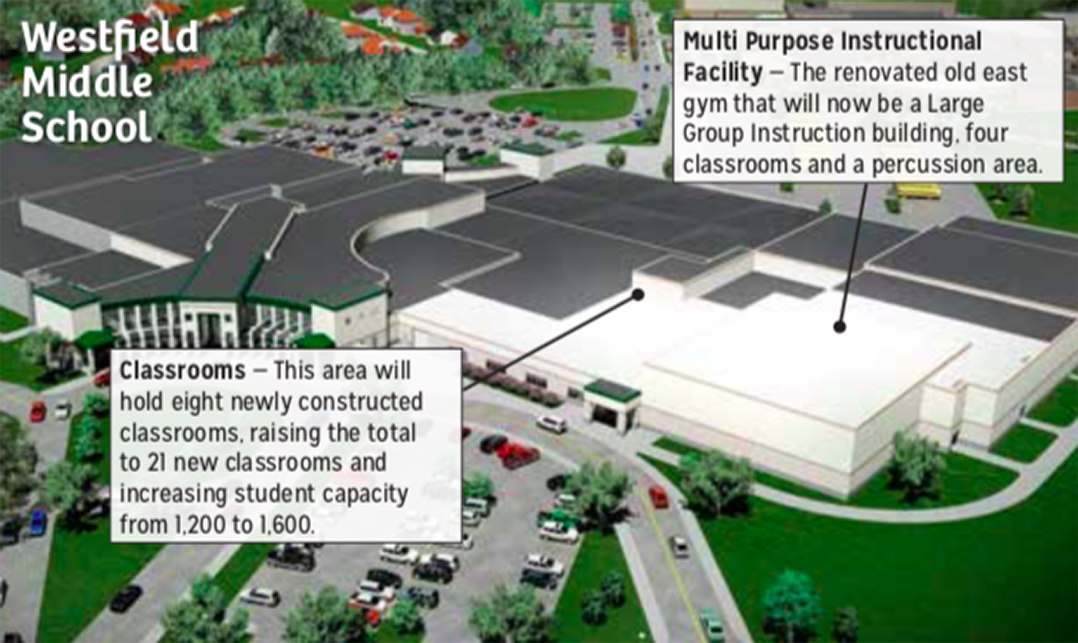 White-roofed buildings are new construction, and more renovations will be made within the original building. (Submitted rendering)

“Building administrators are working with on-site project managers to make sure it is impacting student learning as minimal as humanly possible,” he said.

Montalone said most of the initial work will be done on the new gyms at WIS and WMS. The new gym at WIS will house two gymnasium courts. The new gym at WMS can be configured to house two courts. WMS currently has two single gyms. WIS and WMS will keep their original gyms in addition to the new gyms. The pool space at the middle school will be refurbished into an orchestra and performing arts area.

“Once we get the steel up at WIS and WMS by this fall and get it capped around, they can work inside during the winter,” Montalone said.

Representatives from the district’s construction contractor Skillman Corp. and Indianapolis-based CSO Architects have been meeting with administrative teams in each building since summer 2017.

“We are in daily communications with our site manager and the building staff about what activities they are doing,” said Victor Landfair, vice president of Skillman Corp. “A majority of our work is K-12, and we are very comfortable working around school buildings. We have procedures and policies in place to avoid any issues, but the key is good communication, and the bottom line is that education is always going to come first.” 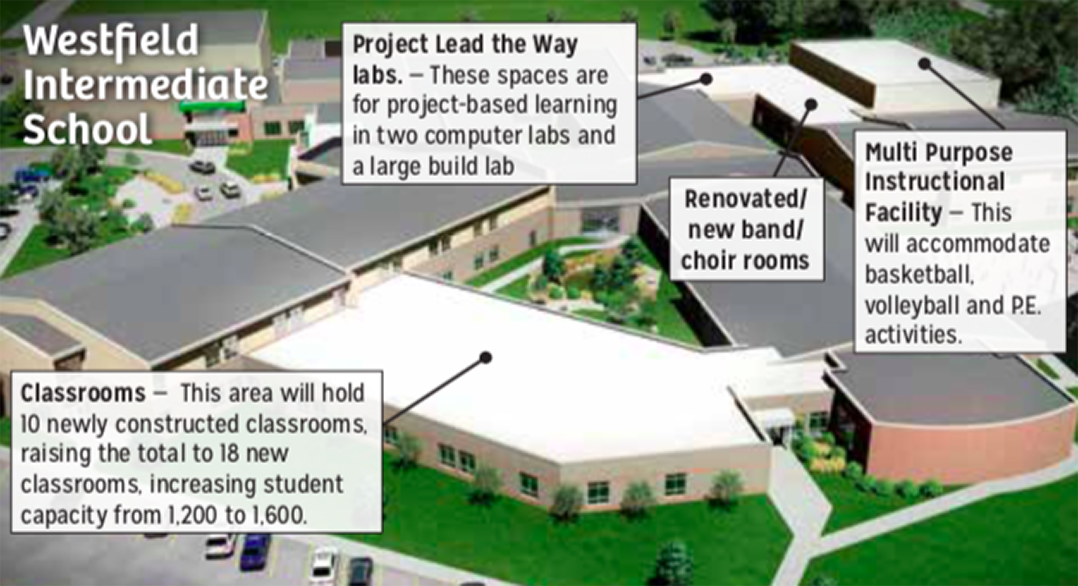 White-roofed buildings are new construction, and more renovations will be made within the original building. (Submitted rendering)

“Skillman and CSO are very important groups to have at the table when we are looking and talking about safety and security of buildings,” he said. “They embed the most in the industry standards and best practices.”

“For the (high school) we are targeting fall break to start and get boots on the ground,” Landfair  said.

Landfair said there will be a reduction of parking in the short term, but it will begin after football season to preserve spots for games.

When renovations are complete at the high school, WHS will accommodate for a total capacity of 3,100 students. New additions, which include 35 new classrooms, add space for 1,000 additional students. More classrooms will be created through renovation in the existing building. WHS also will have a new atrium at its entrance and a new production lab and band hall.

Westfield’s $90 million referendum, passed in 2017, allocated funds to expand and upgrade all of the district’s buildings. The high school’s renovation and expansion is expected to top $42 million. The middle and intermediate schools will cost a combined $23 million.

Other district-wide renovations cost nearly $24 million. Supt. Sherry Grate told Current in May 2017 that the district-wide funds would be allocated to “elementary schools first, then to maintenance of buildings.”

Construction on the intermediate and middle schools will be finished first with a completion goal of December 2019.

The high school’s renovations are projected to take one month longer. Full completion of all district buildings is set for July 2020.

Incoming Westfield High School senior Carly Stuart said she is not concerned about the construction project taking place during the school year.

“Even though I won’t be at the high school at the time it’s finished, I cannot wait to see the final outcome,” Stuart said. “I know the community and school district has worked hard to bring this together.”

However, she said she is worried about limited parking space and the growing number of student drivers.

Skillman Corp. officials have said a new parking lot is under construction at the intermediate school, and additional parking has been added to the north side of Westfield High School.

“I was a big proponent of the referendum and really felt like it was necessary and well-thought out,” Easterhaus said. “They have kept their word on when they would start.”

Easterhaus said she was mainly concerned about her freshman daughter, who has special needs.

“It’s always an issue when you have construction in school and it comes with the all the sounds and all the chaos, so I am a little more concerned with my freshman,” she said. “The addition of chaos could hinder her daily schedule, and that concerns me a little bit, but my assumption is they have thought through that well.”