“For any business to last 40 years means you have to be doing something well,” said Wolfe, who does acrylic and watercolor paintings. “We’ve always had a group of artists who were willing to work together for the betterment of the good. There have always been enough of the older (members) around that we can mentor the younger artists. It’s always been a nice atmosphere at CCA. We’re happy when we sell, but we’re happy when a fellow artist sells something because that means we have to be doing something right.” 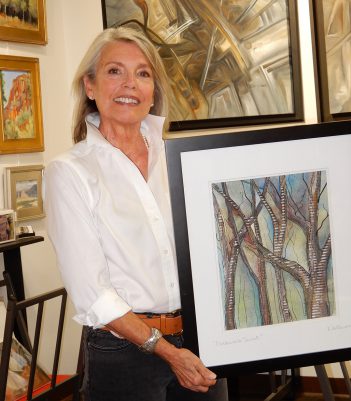 Wolfe, 78, joined the gallery two years after it opened in Broad Ripple.

“We’ve invited past artists to display their art work,” said Lesley Haflich, who lives in Noblesville.

Wolfe has been in charge of collecting former members’ artwork for what is called a Hall of Fame display.

The gallery has 37 artists from central Indiana who are considers owners of the co-op. Their membership fees pay the rent.

“In Zionsville, we typically had 25 artists,” said Indianapolis resident Gail Wiener, who is in her third year as CCA president. “This is a bigger space, so we are able to fit more in.”

“The neat thing is Carmel really supports the arts,” Haflich said. “It has the Second Saturday Gallery Walk every month. There’s Artomobilia, Art of Wine and the Carmel International Arts Festival.”

Indianapolis resident Carol Clendening won the gallery artist contest, which was voted on by more than 250 visitors. Her painting, “Backwoods Secrets,” was made into a poster to commemorate the anniversary and it is now on sale.

Ann Kane, daughter of one of the gallery’s founders, Elizabeth Kane, will be on hand when her late mother is honored in a recognition ceremony at 2 p.m. Sept. 15.