You are at:Home»Current in Zionsville»Zionsville Community»Water lilies brighten busy intersection

Each year in the middle of summer, hundreds of pink and white water lilies cover a small retention pond near the intersection of Oak Street and Ford Road.

“It looks like an impressionist painting,” Zionsville resident Amanda Cooper said. “It’s such a teeny drop of peaceful beauty in the midst of that super-busy intersection. I’m always happy every summer when I see that.”

The lilies were planted when the property was developed by Kosene & Kosene nearly three decades ago. 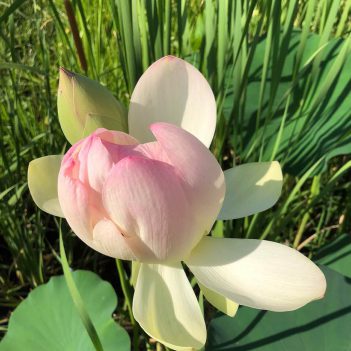 Water lilies bloom at the edge of the retention pond. The lilies were planted when the property was developed by Kosene and Kosene nearly three decades ago. (photo by Beth Portelli)

When Gerry Kosene and his brother, David, began to develop the property 28 years ago, they agreed that landscaping would be an important factor.

“We wanted it to be as attractive as a shopping center could be,” Gerry Kosene said. “As real estate developers, we do care about what we create.”

Landscaping and waterscaping are elements of most Kosene & Kosene properties, including a Broad Ripple development by the Indianapolis Art Center.

“We’re not big horticulturists. We like to do responsible things,” he said. “We wanted to do something that was attractive, that would be a centerpiece, eye-catching and yet be functional and create a nice habitat.”

The brothers selected giant water lilies that thrive in full sunlight. The lilies require cutting back or, as Kosene noted, they will take over.

“In some cases we pull them out by their roots,” Kosene said.  “We’ve always tried to keep it looking fresh and attractive for the community.”

Minimizing landscaping expenses is one way some developers save money on projects, but it’s not the direction Kosene takes.

“It has to be a part of the fabric of the community, and it should look nice,” Kosene said.

“It’s one of those special things about Zionsville, those little hidden gems,” Cooper said.