You are at:Home»Current in Carmel»Carmel Community»Developer outlines plans for 44-home neighborhood south of University High School 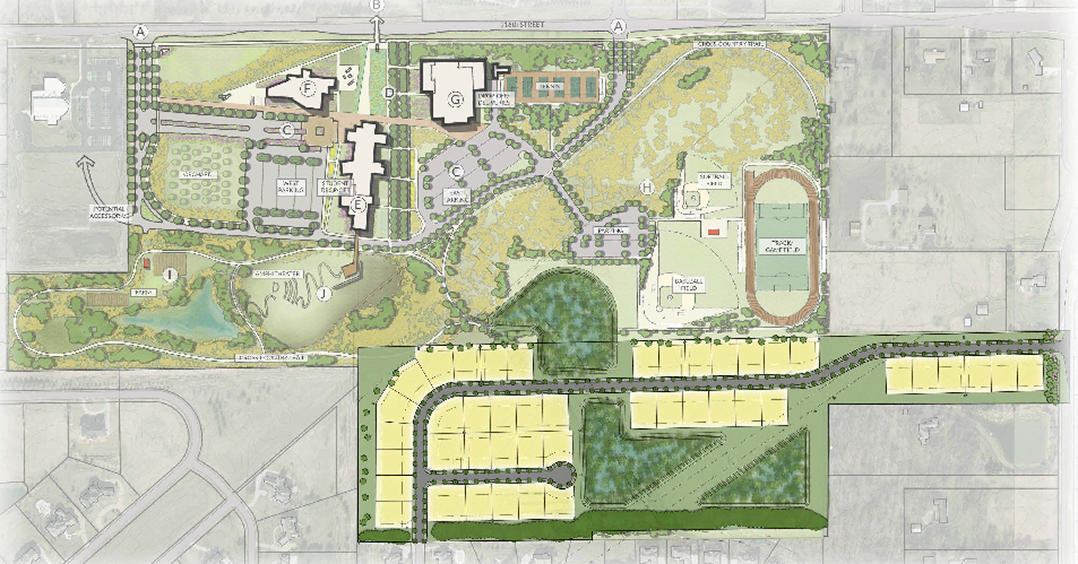 A 44-home neighborhood is proposed south of University High School, which has created a master plan to fill out its west Carmel campus. (Submitted photo)

Several people who live near the proposed The Parks at Towne Meadow expressed concerns while others gave their support for the project before commissioners voted to send the matter to the Sept. 4 CPC residential committee meeting. The full plan commission will have the final vote.

Pittman purchased the land from UHS earlier this year after school leaders completed a master plan and realized they had an excess of 36 acres. He said he is working with the school to come up with a drainage plan, a trail system to connect the neighborhood to West Park through the UHS campus and an educational easement that will allow students to do water-quality testing or other classwork on a portion of the property.

“It really is going to be a nice partnership between our two entities,” Pittman said.

Most of the residents who spoke at the meeting were from the neighboring Kings Mill and Huntington Chase neighborhoods, and many praised Pittman for meeting with them and addressing concerns. Among those concerns are maintaining trees to provide a buffer and the density of lots, specifically in the panhandle on the east side of the site, bordering multi-acre estate lots. Many remonstrators said they were against building a road to connect to UHS property.

“I still think it’s a little presumptuous (Pittman) bought the property without having this approved,” said Brad Donaldson, who lives near the site in a home built in the 1800s. “I know he’s going to do something with it, and I assume it’s going to be very nice. It just affects us so directly, and we want to stay in our farmhouse.”

Commissioners asked Pittman to specify several items before the committee meeting, such as where a trail might tie into a future UHS trail system.

“I think it’s confusing to call it The Park, but my vote is not dependent on it,” he said. “You just might want to reconsider the name as it relates to West Park and its location.”