You are at:Home»Current in Carmel»Carmel Community»Carmel firefighters among first to view app that projects navigation info on windshield

A team of graduate students at IUPUI is developing a navigation app to help firefighters get to and from emergencies more safely, and the Carmel Fire Dept. was one of the first to get a sneak peek at the new technology. 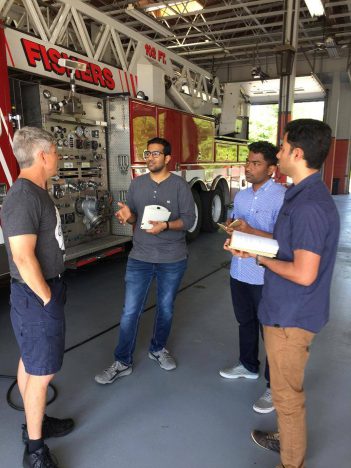 The app, called Fire Ray, projects a map display with real-time navigation information, such as construction detours, directly onto the windshield of fire engines.

The app was developed by IUPUI Information Science Group HCI (Human Computer Interaction) for a national technology competition hosted by California company WayRay. They were named one of five winning teams. Recently, the team visited the Carmel Fire Dept. to look at the navigation technology already in use and talked with firefighters about their needs.

“This technology would actually show a lot of traffic flow and patterns, which would be very helpful to us,” CFD spokesman Tim Griffin said. “If two trucks were heading to the same intersection, which happens constantly, this would put it on there and showcase red or green for go or wait. For us, the most dangerous things firefighters do is drive to and from scenes. Anything that can help with that has the potential to save our lives.”

Carmel resident Lou Lenzi, a professor of practice in the IUPUI School of Informatics and Computing and advisor of the IUPUI student team, said the app’s design is meant to improve upon existing navigation technology.

“What the students wanted was, rather than firefighters having to take their eyes off the road, why not aggregate that information and project it right onto the windshield? We all share the road, so it’s about the safety of the entire community,” Lenzi said.

Although the Fire Ray app is not yet available, WayRay will fly the IUPUI team to California this fall so that it can begin work on a prototype.