Meghan Mahoney didn’t know anyone on her team when she started her charity bicycle ride.

“I went into it with no friends and came out with a family,” Mahoney said. “You spend every minute of every day with 22 other people. We got so close. When you do something that physically grueling, you forge a very strong bond.” 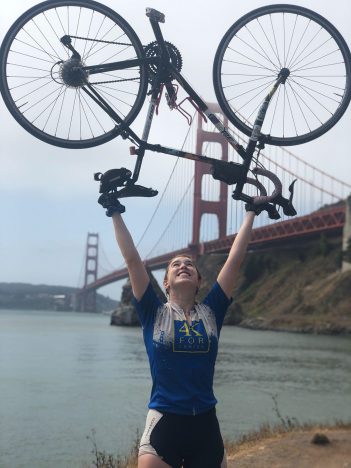 Mahoney, a 2015 Carmel High School graduate and Colorado State senior, was doing the ride to benefit Ulman Cancer Fund for Young Adults. It was founded by Doug Ulman, who discovered he had cancer when starting his sophomore year at Brown University.

“Whenever he went to the hospital he was surrounded by either geriatric patients or very young children, and that was a huge struggle for him, especially being in college and away from his family,” Mahoney said. “The organization was founded to spread awareness for young adults with cancer and allows them to find a community like them that are going through the same struggles.”

Mahoney’s bike team traveled from Baltimore to San Francisco, crossing 10 states during the course of 70 days.

“We went to hospitals and donated chemo-care bags and just generally raised funds and awareness for the cause,” Mahoney said.

There were 23 members on her bike team, and each raised more than $4,500 before the trip.

“I raised all $5,000 by drawing people’s pets,” said Mahoney, a wildlife biology major. “It’s a hobby. I’m also the comic artist for my school paper.”

Mahoney, who had been a swimmer for CHS, is a member of Colorado State’s triathlon club.

The 4K represented the approximately 4,000 miles traveled from the various cross country routes the teams took. Each cyclist had 10 van days where they would support teammates by getting supplies. There were rest days when they visited hospitals.

“We rode 70 to 80 miles a day, but we got up to 115 miles,” said Mahoney, adding some of her team members were novice riders. “We would stay at YMCAs, churches and schools. All of our food was donated. We were living on the generosity of others. Through that we met a lot of amazing people, who we both shared our message with and we heard their stories.”