You are at:Home»Current in Carmel»Carmel Cover Stories»On a roll: For CHS teacher, skateboarding is more than a pastime

It’s been a second job and his way of helping others.

“I started skateboarding when I was 10, and I haven’t stopped,” said Devlin, a 2003 CHS graduate who teaches engineering and construction classes at his alma mater.

Devlin, 33, said he tried other activities when he was younger.

“Nothing else stuck. Skateboarding was always a thing all my friends did, and I made friends because of it,” he said. “It’s what got me through a lot of tough parts of being a kid and growing up. It’s been one consistent thing through my whole life. Skateboarding for me was all consuming. For some years, it was all I thought about.”

“There are two kinds of skateboarding, street skateboarding and transition skateboarding (in a bowl-shaped skatepark),” said Devlin, who has a small skatepark in the backyard of his Broad Ripple home. “I was always a street skateboarder when I was younger. That’s when you jump down the steps and handrails and everything. Then I found this place and I was, ‘Man, they build this.’ I’ve always had an engineering, mechanical mind. I just wanted to know how to do it. Every chance I could, I got my hands dirty, digging in the concrete, building walls, whatever. It just escalated from there.”

So for several years, Devlin has had a part-time job with Hunger Skateparks, a design and construction company.

“We work as a team to design new skateparks,” Devlin said.

“Tim’s knowledge of engineering helps to create visualizations, using engineering software, that envision new possibilities in old or unused spaces,” Wiesenhahn said. “This has been a great asset to his work as a designer and advocate because he can create renderings and then make quick changes based on community input. It allows for collaborative and creative interaction between designer and users.”

Devlin is an active member of Indy Skatepark Advocates.

“The major problem with skateparks and the reason we started our group is because people think they can build skateparks and they can’t,” Devlin said. “Skateparks have to be built by a skatepark company. We wanted to make sure when a city is going to be spending money on a skatepark, (the city) is getting what the skatepark users want.”

That’s where the idea for the advocacy group started, he said.

“It’s evolved into let’s make sure there are skateparks in every neighborhood for people to use,” Devlin said.  “It’s such a powerful tool where mentorship just kind of happens naturally.”

Devlin said he talks to younger skateboarders to inspire them.

“They see this guy’s a skateboarder and he’s a teacher and doing all this other stuff,” Devlin said. “They think, ‘I guess I can have a career. I don’t have to be a punk, vandal kid.’”

Devlin said the group wanted to refurbish a skatepark near the Major Taylor Velodrome in Indianapolis in 2015.

“That was the birth of the new Skatepark Advocates,” Devlin said. “We added a few features and completely painted the skatepark. It was covered in profane graffiti. Since then, this incredible community has formed around the skatepark. I’ll show up and there are kids picking up trash. People watch out for each other.”

Wiesenhahn admires the work Devlin does with the Indy Skatepark Advocates.

“His skatepark advocacy builds relationships between diverse neighborhoods and people that work together to realize a large public project (can) bring renewed pride to a place and in turn strengthen the overall community bonds,” she said. 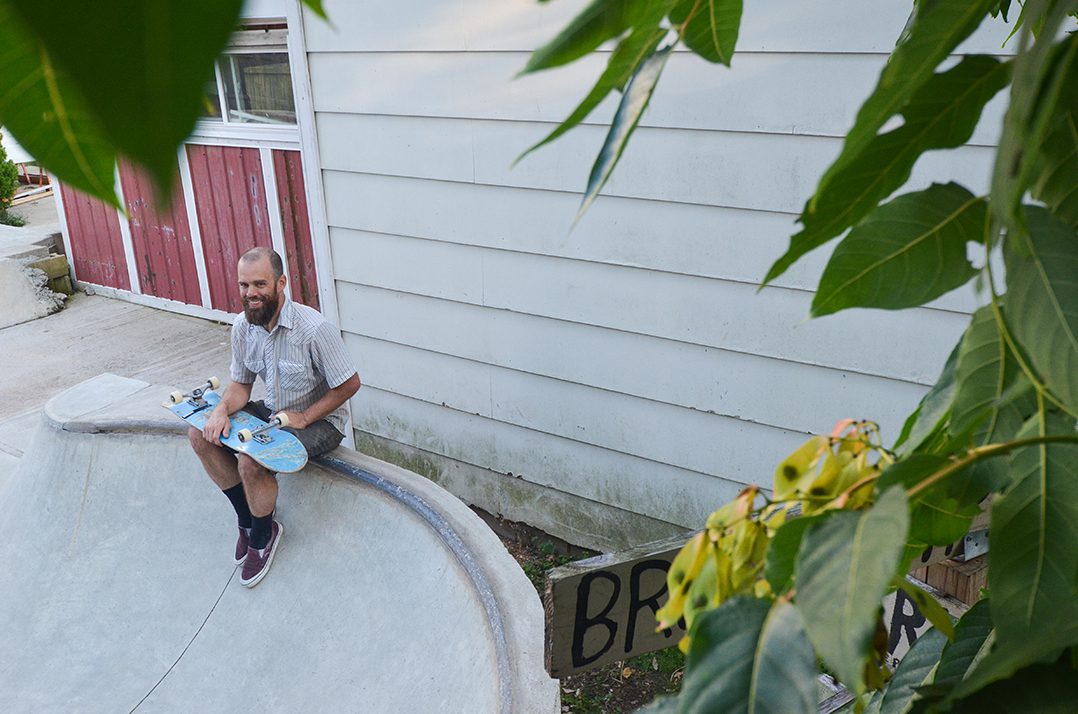 Devlin and his students want to help the Monon Community Center transform its skatepark.

“The bowl got built by someone who doesn’t understand skateboarding, and it’s almost un-skateable,” Devlin said. “It’s this big chuck of concrete sitting right next to the Monon Center that if it was built correctly would be used a lot, but it’s not.”

So, Devlin said several Carmel High School students made a design for a new bowl.

“We actually made a model of what we want to build and had an estimate of what it would cost,” Devlin said. “We gave an estimate to the Monon Center about how we could renovate the bowl. Right now, they’re in the process of taking our ideas and pushing it forward.”

Raising funds to do it is an issue, Devlin said. But skateboarders are undaunted by challenges.

“If you watch a skateboarder trying to land a trick, it doesn’t just happen,” he said. “They get punished. They fall, they scrape their arms up. They know what it takes to get something done.”

Carmel Clay Parks & Recreation Chief Operating Officer Michael Klitzing said he’s discussed the potential upgrades with Devlin and that they will be considered as CCPR develops its Parks and Recreation Master Plan.

Personal: Devlin went to Purdue to study engineering for one year. He decided to switch to IUPUI for video production, graduating with a degree it digital storytelling. After taking time off to build skateparks, he got a master’s degree and certification for education in technology. He taught eighth grade in Wayne Township in Indianapolis for three years. He is starting his third year at CHS. Devlin and his wife, Alyssa, have a daughter, Zephryn, 7.

For more: To donate to the Indianapolis Parks Foundation’s funding pages for ongling projects, visit indyskateparks.com. For more information on the group, email indyskateparkadvocates@gmail.com.