Anna’s take: 5280 Bistro is a food truck eatery. The company sells a wide variety of items out of the truck, which frequents Fishers Farmers Market and also can be seen at many beer festivals across the state. MashCraft Brewing Company, 11069 Allisonville Rd., features offerings from 5280 Bistro not seen on the food truck’s menu. 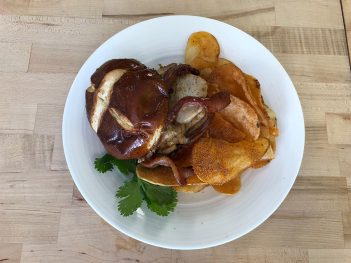 The 5280 PB&J stands for pork, bacon and jam. All ingredients are sandwiched between a pretzel bun and accompanied with seasoned potato chips. (Photo by Anna Skinner)

I ordered one of the restaurant’s more popular items, the 5280 PB&J. The PB&J stands for “pork, bacon and jam.” Depending on the size, three to four slabs of pork loin are layered in a toasted pretzel bun. Thick, peppered bacon blankets the pork, and a homemade fig plum jam is smeared on the top bun. It’s a handful of a sandwich, and its flavor notes are sweet and savory. 5280 Bistro’s signature crispy potato chips, fondly referred to as “crack chips,” and a sprig of cilantro accompany the sandwich, which is stacked high. The generous portion is well worth the $10.

5280 Bistro’s menu changes frequently, but the 5280 PB&J is one of its staples, and for good reason. Prepare to get your hands dirty as you dive in, though.

Chef’s take: Chef Joseph Hsu is from Taiwan. He said the main reason he and his wife began the business in a food truck is because the financial risk is much smaller. Also, the couple found the food truck is wildly popular at craft beer festivals, where Hsu said 5280 Bistro has found its niche.

“We go outside the box and use things to make the food more interesting,” he said. “Especially coming from the pairing with beer events, the festivals we do, we want to stand out and look different from everybody else.”