You are at:Home»Current in Noblesville»Noblesville Cover Stories»A new train to Noblesville: Nickel Plate Express to open to the public Sept. 15

Nickel Plate Express will open its train cars Sept. 15 from a station in downtown Atlanta and will travel south to Noblesville at 216th Street in the northern part of the city.

It’s been more than two years since the Nickel Plate tracks have been used after the owner, the Hoosier Heritage Port Authority, banned the former operator, the Indiana Transportation Museum, from running trains on the tracks. In March, the HHPA and Nickel Plate Heritage Railroad entered a 15-year tourism and excursion programming agreement. Through Fishers and Noblesville, the HHPA is working to design and build the Nickel Plate Trail, which would remove the tracks and replace it with a pedestrian walking and biking path.

Under the umbrella organization of the Nickel Plate Heritage Railroad, the Nickel Plate Express nonprofit has been working over the summer to repair and rehabilitate tracks along the 12 miles of railroad it operates.

“Originally, we weren’t going to go all the way to 216th Street in 2018. It was just going to be Atlanta to Arcadia, but we had the money to extend it, and I think obviously the people of Noblesville really want a train here,” said Dagny Zupin, communications coordinator for Nickel Plate Express.

Plans are moving forward to extend tracks to downtown Noblesville in 2019.

Zupin said beyond 2018, extending excursions further into Noblesville is a “definite possibility.”

“There are just a lot of moving parts and a lot of people that we have to consult with to do that, but there’s a definite interest,” she said.

At the moment, there is nothing at the 216th Street stopping point and railroad intersection.

“The way our train operates, there’s an engine on the front and an engine on the back,” Zupin said. “So, since there’s nothing there yet, it will just kind of be a stop-and-start-again route. In the future, we’ll be switching up our boarding and unboarding locations. So, even though we’re boarding and unboarding out of Atlanta right now, we would love to have some place to board and unboard in Cicero and Noblesville. That’s way down the road, but that’s the idea, to involve as many of the towns as possible so everyone can share in the economic development of it.”

The end goal is to run the Nickel Plate Express from Tipton in the north to downtown Noblesville in the south. Under the current operation schedule, passengers will take the 12-mile ride at approximately 10 mph, which will make for a one hour and 15 minute-trip.

Atlanta Pacific Rail, also under the Nickel Plate Heritage Railroad organization, will oversee the day-to-day technical operations of the trains and railroad.

“They’re in charge of upkeeping our trains, upkeeping the track, hiring the engineers, hiring the conductors,” Zupin said. “Atlanta Pacific rail is important when you’re talking about financials, the depot and safety of the railway.”

For its inaugural trip, Nickel Plate Express is focusing on education.

“We’re going to start out in September with a general ‘meet the train’ excursion, just to help kids and adults get acquainted with the railroad,” said Dagny Zupin, communications coordinator for Nickel Plate Express. “We’re going to have a scavenger hunt that shows people the parts (and staff) of the train because I think a lot of people aren’t familiar with it, and it should be a fun learning experience.” 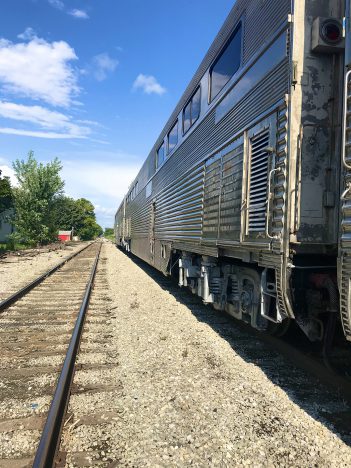 The Nickel Plate Express’ four cars are Santa Fe Hi-Level El Capitans and include two passenger cars, one transition car and one dining car. The passenger cars were developed in 1956 for the El Capitan luxury train, which operated between Chicago and Los Angeles. Unlike conventional passenger cars, the high levels are two stories tall, with an upper and lower floor with most seating on the upper level. (Photo courtesy of Zach Raber)

In October, Nickel Plate Express will partner with the Hamilton Heights FFA to round out its Pumpkin Express excursion.

“The kids will board the train in Atlanta and we’ll go to the pumpkin patch that’s near the Hamilton Heights school,” Zupin said. “That’s where the FFA club is going to have a fall festival set up. So, riders can purchase pumpkins and there’ll be games and more.”

Also in October, Nickel Plate Express will operate a Ghost Train in the evenings.

“We’re having a storyteller create a ghost story that will be specific to Hamilton County and based on local lore,” Zupin said.

Zupin also said the organization is partnering with the Roads Hotel in Atlanta, believed to be haunted, for those events.

In mid-November, Nickel Plate Express will steam into the holiday season with the Reindeer Ride, where kids can ride the train with Santa and more.

Uncorked Express will serve as the organization’s wine-tasting train, and Ales & Rails will give riders a chance to sample local brews. Zupin said excursion dates haven’t been set but that they would be scheduled sporadically in the fall and in the evenings.

All excursions will take place on Saturdays and Sundays and occasionally on Fridays. To learn more, visit nickelplateexpress.com/schedule.

The Nickel Plate Heritage Railroad organization also includes the Arcadia Depot, which is the 150-year-old train depot in Arcadia.

“That will be a museum and a drop-off and destination point. It’s always been a museum. For a little bit, it was a public library,” said Dagny Zupin, communications coordinator for Nickel Plate Express. “Right now, it houses historic glass, some old uniforms from the high school, stuff like that. We’re going to keep a couple of those things, but it’s getting a total makeover.”

The makeover is being made possible by an Indiana Humanities Grant, which awarded the organization $4,000.

“There are going to be museum panels installed that will kind of tell the history of the railroad in that area,” Zupin said. “It’s all getting a facelift right now.”