You are at:Home»Current in Westfield»Westfield Community»Westfield Washington Public Library board president resigns

Former Westfield resident Mike Thomas attended his last meeting as president of the Westfield Washington Public Library Board Aug. 8. He had served the board in various roles for 12 years. A move just across the street forced him to step down.

“I actually moved right across the street from Westfield, but I moved out of the district by about 300 feet,” Thomas said. “I don’t qualify to be on the board anymore. Otherwise, I’d still be involved.” 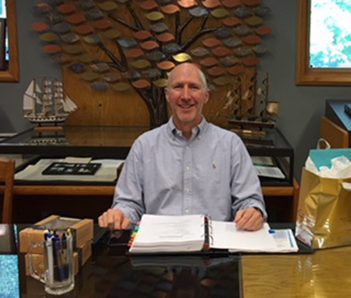 Mike Thomas attends his last board meeting with the Westfield Washington Public Library board. (Submitted photo)

A former neighbor approached Thomas while he was walking his dog 12 years ago and invited him to join the board.

“That conversation started 12 years of library board involvement,” Thomas said. “I probably wouldn’t be on the board today otherwise.”

Thomas joined the board during a particularly busy time.

“I joined when the board was in the process of building a new building,” Thomas said. “The project was approved and went forward, then there was a petition remonstrance period. I led the library’s response to the petition remonstrance. That was my big involvement right away.”

Thomas and his son canvassed neighborhoods acquiring the needed signatures. He’s glad his son could be part of the process.

“I never really thought about it before, but the example it set for him is really cool,” Thomas said. “It’s kind of cool to see how he looks at community involvement as a result.”

Thomas is sad about leaving the group after 12 years of working so closely together.

“It’s weird to leave,” he said. “I met fantastic people on the way. We have great board members. We have a great staff.”

The staff at WWPL will miss him as well.

“Mike always provided me with thoughtful guidance,” Library Director Sheryl Sollars said. “He was always available to listen and help or to share the excitement in our library’s successes. His wisdom, humor and leadership abilities will be greatly missed by the library board and myself.”