The late Silas H. Burgher Jr. was quite the character, his son Bob Burgher said.

“When they were building Cool Creek subdivision, my dad broke in the volunteer fire department, hot-wired the fire truck on Sunday and sprayed down the street, sidewalks and everyone’s glass windows and washed them,” Bob said. “He got reprimanded and had to replace the glass window and the door, which he knew he would do. He just got tired of Main Street being dirty.” 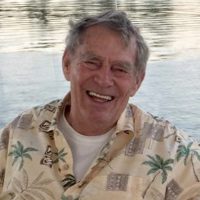 Burgher, who owned a Carmel jewelry store, Burgher Jewelers, for 44 years before it closed in 2001, died Aug. 2 at his home in Bloomfield. Bob said his father didn’t want a funeral service but a celebration of life is planned on what would have been Burgher’s 82nd birthday Oct. 21 in Bloomfield.

“We’re having a Si-Labration,” said Bob, who lives in Carmel.

The elder Burgher was raised in Carmel, graduating from Carmel High School in 1954.

The jewelry store opened in 1957 in downtown Carmel after Burgher graduated from Elgin Watchmaking School in 1956. The store moved a couple times in the area. In 1972, the store became the second merchant to move into Keystone Square Mall, which became Merchants Square.

“Everyone told Dad that he was nuts because Carmel would never be able to support a major shopping center like that,” Bob said. “Carmel had just begun to explode.”

Bob said the business more than tripled in its first year in the Keystone Square store.

Burgher started a tree farm and cattle farm on his property, which he called Plantation City, in Bloomfield in 1978. He eventually sold the cattle and some of his trees and land over the past 10 years. He continued to help his sons, Bob and Silas Jr., run the store and was active in the Carmel Rotary Club.

Burgher, who served in the U.S. Army, was a leader in the Bloomfield Rotary Club. He gained a lot of media attention for shaving off his bushy eyebrows, helping raise money for the Polio Plus campaign. The YouTube video of the shave gained wide attention.

“He had a huge personality, but not as huge as his heart and willingness to help,” Carmel Rotary Club member Randy Sorrell said.

In addition to Bob and Silas Jr., Burgher also had two daughters, Amber Haake, who died of breast cancer in 2011, and Carla Coyler. Burgher and the children’s mother, Donna, divorced after 36 years. Burgher is survived by wife, Amy.