As a young reporter for the Bluefield (W. Va.) Daily Telegraph from 1972 to 1987, Garet Mathews wrote several features on The Church of the Lord Jesus in rural Jolo, W. Va., which included longtime snake handler Dewey Chafin. 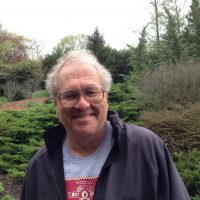 That is the inspiration for the Carmel resident’s play, “They Shall Take Up Serpents,” which will debut at IndyFringe Festival in Indianapolis Aug. 16 to 26.

“I have had the play in the back of my mind for 20 years or more,” said Mathews, who was a columnist for the Evansville Courier before retiring in 2011. “My numerous interviews with Jolo church members were among my best-received stories, and I always thought there was the potential for a longer work with this material.”

Mathews said the character of Cindy is based on a young woman who was contemplating picking up serpents when he interviewed her.

The play is directed by Westfield resident Kate Hinman, who works on many plays at the Westfield Playhouse. Hannah Jo Black, Indianapolis, plays Cindy. Mathews’ wife, MaryAnne, plays Velma, a wisecracking elder of the Jolo Church of The Lord Jesus. Kyle James Dorsch, Fishers, plays Ran, a young newspaperman who is interviewing members of the Jolo Church for his first feature story. Westfield resident Thom Johnson plays two roles, Cindy’s tyrant of a father and a drunk, who throws firecrackers at the church.

By the end of 1928, all three Fail sisters will be dead, expiring in reverse order, youngest to oldest, from blunt trauma to the head, disappearance and, finally, consumption. The cast includes Allie Crawford as Gerty Fail; Morgan Goodrich, Jenny June Fail; Mady Phillips, Nellie Fail; and Ayden Stewart, Mortimer Mortimer.

Carmel-based Gregory Hancock Dance Theatre will present “Intoxicating India” at IndyFringe. Dustin Klein and Tom Alvarez, who conduct the Magic Theatre Cabaret at The Cat in Camel, will present a production of “Broadway’s Leading Ladies: A Tribute” at the festival.

Show times are available at indyfringe.org.