It all came together very quickly for Iszabel Cohen and her teammates.

The Carmel High School freshman competed on a U.S. volleyball squad that recently captured the bronze medal at the Maccabi Youth International Games in Israel. Maccabi USA is a U.S. Olympic Committee Multi-Sport Organization. The organization’s motto is building Jewish pride through sports. 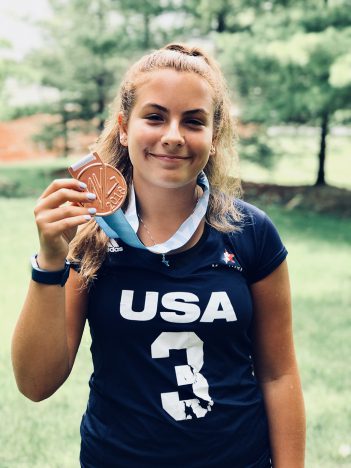 “We actually only had one practice together before the first match while the other teams were training together for several few months prior to the games,” Cohen said. “So we had to get used to each other’s playing and learn each other’s strengths, which was challenging in such a small amount of time. Once that all clicked we just worked together, made sure we were having fun and did our best.”

Cohen earned the selection to the team by sending videos of herself playing volleyball and providing answers about her past playing experiences.

“The best part of the experience was playing and getting a chance to talk to people from different countries all over the world,” she said. “I was actually the youngest player on the team, so it was super exciting to play with people at a higher level than me, too.”

This was Cohen’s third time visiting Israel, so she saw some of the sights she had visited previously.

“But going with the team and the other sports teams made it a totally different experience that was so incredible,” Cohen said. “Going to the Western Wall is also such an amazing sight to see, which I know I will always enjoy.”

Instead of volleyball, Cohen is pursuing her love of long distance running and has joined the CHS cross country team this season.