You are at:Home»Current in Carmel»Carmel Community»Longtime Marine retires to Carmel after career abroad

Throughout his career, Col. Todd Finley has lived in 17 places, but he now calls Carmel home. 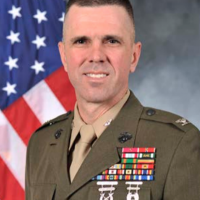 After 27 years of service, Finley recently retired from the U.S. Marines during a ceremony at the Indiana World War Memorial in Indianapolis.

In 2015, while Finley was stationed at Camp Fuji, Japan, his wife, Lisa, and their children, Mitchell, 14, and Arden, 10, moved to Carmel to be closer to their lifelong best friends, Joe and Julie Miller. Finley joined his family in 2016 while completing his last assignment as sustainment division chief within the Operations Directorate at U.S. Transportation Command in Illinois.

Finley said while growing up, his father told him stories about being an aircraft crew chief in the Marines, and that’s what inspired him to attend the U.S. Naval Academy. He completed Officer Candidate School in 1990 and received his commission in May 1991.

In 1992, Finley joined the 1st Battalion, 10th Marines and had deployments in Okinawa, Japan, Haiti and Norway.

“There’s a calling. You feel like you have a sense of purpose for the greater good,” he said. “There is a sense that you are serving a purpose that is greater than you.”

In 2000, while deployed with the 24th Marine Expeditionary Unit as commander of Battery G, he served on a ship in the Mediterranean Sea for six months preparing for contingencies.

Finley spoke about the friends he made along the and watching a number of young people take their oaths of citizenship; engaging with local leaders around the world; the young faces looking back at him and counting on his leadership before deployment; connecting with the locals on the Syrian border; and helping to cultivate a view of U.S. troops for a new generation.

“The Armed Forces is the absolute cornucopia,” he said. “(There is) every culture, every religion, and literally nations around the world who have come to serve.”