You are at:Home»Current in Westfield»Westfield Community»ClearObject CEO and Salesforce leader examine hacking concerns

It was one of several issues examined by McDonald and Dan Fowler, Salesforce director of customer success, during Westfield Chamber of Commerce session on technology July 19 at The Bridgewater Club in Carmel. 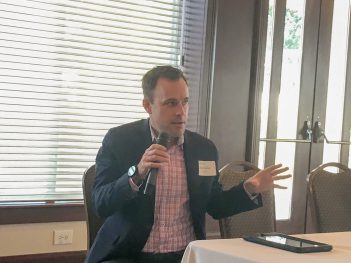 McDonald said the risk that it will be misused by people is inherent in any technology.

“It’s really important as business owners and leaders to try and apply intelligence and logic to this problem,” said McDonald, whose company is an Internet of Things systems innovator. “I completely agree if you are relying your entire business on that box in the closet and the network cable, you should talk to somebody professionally about how to make that better for yourself.”

McDonald offered an analogy to separate the difference between real and perceived security issues.

McDonald said when ordering a book on Amazon, customers often have concerns about typing in credit card numbers. However, McDonald said people don’t think as much about restaurant servers taking a photo of  a credit card.

“The reason you feel different is even though it’s brief and not meaty, you develop an interpersonal relationship between you and the waiter,” McDonald said.  “People can’t trust computers yet. They can only trust other people, so you feel that way about Amazon because they can’t see the people behind Amazon and it’s inherently untrustworthy. Which of these two systems is more secure? Amazon, by far. But your mind perceives it as exactly opposite.”

Fowler, whose company is a leader in cloud computing, said many people are afraid of artificial intelligence.

“It’s not ‘The Terminator,’” Fowler said. “You have tons of data you’ve gathered over the years from customers, and what you do and what they do. Instead of just running a report and looking back at the numbers, it’s starting to look forward, and in an unbiased look maybe what is the next best move or what should I be doing with my customers. What types of email marketing campaigns, or phone calls (should be made), and what can we do better. Artificial intelligence can help you make that decision before you even engaged.”

Fowler said most companies wouldn’t hire a data scientist because of the cost.

“But if you use cloud-based technologies that do this, you can buy into a pool of data science technology and leverage those types of things to begin to take the next leap,” Fowler said.