You are at:Home»Current in Carmel»Carmel Community»Carmel woman shares passion for Haitian literature

It was by chance that Amy Lynelle found Haiti during her doctoral studies, but the nation and its rich history drew her attention enough to become her specialty. Since 2004, Lynelle has devoted her time to educating others about Haiti through literature. 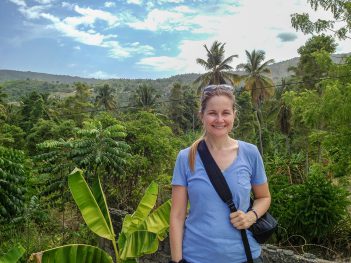 “I didn’t know it was going to be Haiti until I happened to pull a book off the shelf,” she said. “It was an anthology of Haitian poetry and I just couldn’t believe how much literature there was starting in 1804 and the fact that at the time, hardly any scholars had worked on it. To me, it was new and different and worthy of attention.”

Haiti declared independence from France in 1804, but France and the U.S. didn’t recognize the new nation-state. Lynelle said France forced Haiti to pay a $22 billion indemnity to be recognized, which Haiti continued to pay until the 1920s.

During her time as a high school and college professor, Lynelle incorporated Haitian poetry into her classes. She said literature provides clues about what was happening in Haiti at the time, and how Haitians felt about it.

“There are just so many historical reasons why Haiti continues to be in the shape that it’s in,” she said. “I think the reason literature is so key is because it’s important to note that Haiti should not be reduced to its poverty.”

Lynelle is taking time away from teaching to raise her daughter, but she remains active as an independent scholar through conferences, guest speaking, publications and research. She said her goal is to erase misconceptions of Haiti and encourage people to visit with a mindset for learning rather than helping.

Lynelle attended Indiana University before pursuing a master’s degree from the University of Pittsburg and a doctoral degree in French Literature, which she earned in 2008. She taught French, English and French literature at the high school and collegiate level.