You are at:Home»Current in Carmel»Carmel Community»Congregation Shaarey Tefilla aims to continue strengthening bonds with interfaith community in wake of anti-Semitic vandalism

When Corey Freedman became president of Congregation Shaarey Tefilla five weeks ago, he had a goal of building bridges with the local interfaith community.

The Carmel conservative Jewish congregation has already made great strides toward that goal, although not in a way anyone would have predicted or welcomed. More than 1,000 people representing various faiths and walks of life packed into the synagogue for a solidarity gathering July 30 to show their support two days after Nazi flags were discovered spray-painted on a dumpster enclosure behind the building.

“I want stronger bonds with all of our community, and I want it to be a two-way street,” Freedman said. “Last night what I saw from the interfaith community, from everyone being absolutely willing to step up and say, ‘This ain’t going to happen,’ I think is the kind of support in general we’re going to have for building solid relationships.”

Speakers and attendees included synagogue officials, leaders from other religious communities and politicians. Freedman said event planners anticipated anywhere from 50 to 200 guests and were blown away by the response. Other organizations had offered shuttle buses and helped directing traffic, and both were useful in managing the standing-room-only crowd. 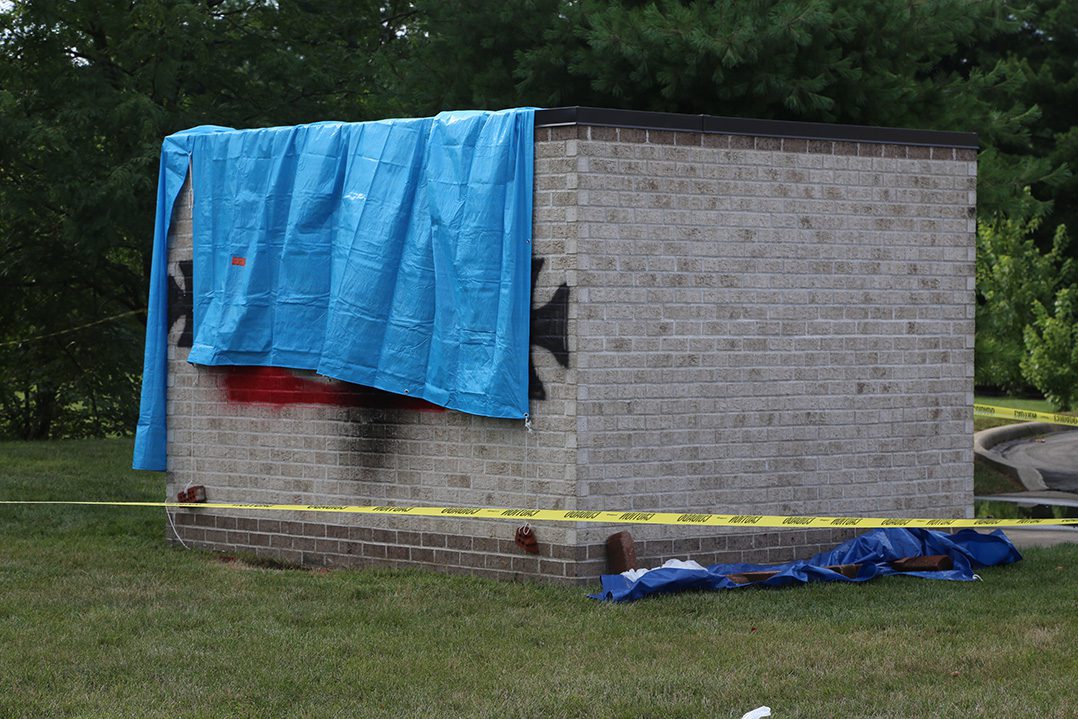 A tarp covers anti-Semitic graffiti on a dumpster enclosure at Congregation Shaarey Tefilla in Carmel. (Photo by Ann Marie Shambaugh)

Synagogue officials learned of the graffiti Saturday afternoon after a neighbor noticed them while mowing a lawn adjacent to Congregation Shaarey Tefilla. They contacted the Carmel Police Dept., which has been working with the FBI to investigate the incident.

Freedman said the act was caught on a security camera on the building that points toward the dumpster enclosure. A CPD spokesman declined to provide additional details to avoid compromising the investigation.

Freedman said this is the first time the congregation has been targeted since it moved to W. 116th Street approximately 12 years ago. He said it experienced vandalism to a lesser extent at a previous building approximately 20 years ago.

Indiana is one of only five states without a hate crimes law, and on July 30 Gov. Eric Holcomb said he wants lawmakers to address the issue in the next legislative session. Freedman said he would support a new law —  if it’s “done well and thoughtfully.”

“This (instance) will only be vandalism, but clearly this wasn’t just vandalism,” he said of the graffiti at the synagogue. “I support the hate crime law in the sense that it really addresses hate, and this was intended to be a hate message.” 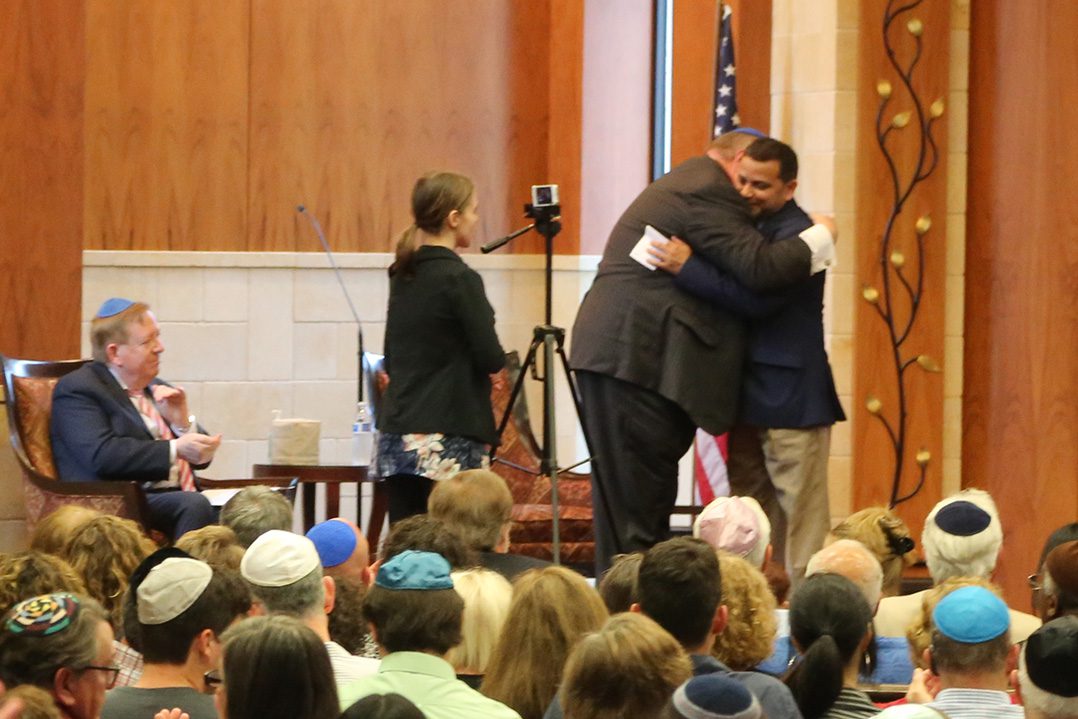 After learning of the graffiti, Freedman said Congregation Shaarey Tefilla and other Jewish leaders met to decide how to address the issue, questioning whether they should minimize the situation or use it as a way to bring the community together.

They chose the latter, as evidenced by the large solidarity gathering. Officials will soon meet to determine next steps to help congregation members heal and continue connecting with the broader interfaith community. Freedman said that may include hosting an interfaith Seder, an idea that had been in the works before the vandalism.

For now, Freedman said his congregation has embraced the encouragement of supporters he didn’t even know they had.

“Together, we’re a thousand-fold stronger, and that was clearly demonstrated,” he said.

“Somebody spray-painted some hateful things on the enclosure to our dumpster, and because that happened, this synagogue is full of brothers and sisters of goodwill. All they have done is awaken the sleeping giant of love and acceptance and mutual respect.” – Rabbi Benjamin Sendrow, Congregation Shaarey Tefilla

“It is not only repugnant and a detestable deed of hatred, but we believe it’s an act of cowardice. We stand strong and united, shoulder-to-shoulder against such forces of bigotry and intolerance that has neither any place in our hearts nor any place in our community, city or nation.” – Ashhar Madni, Carmel Interfaith Alliance and Al Salam Foundation board member

“What that graffiti stands for is anathema to everything we as Americans have fought for and stood for since our country was founded.” – Carmel Mayor Jim Brainard