Blake Dauby is an accomplished singer, a skilled musician and an avid creator of music videos.

In addition, he is a dancer, video editor and a gifted craftsman who loves nothing more than making people smile — literally — through his art. 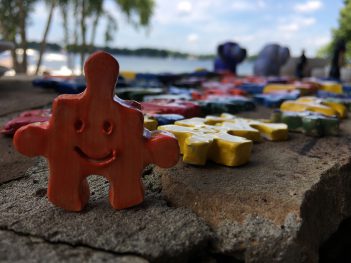 His signature items are handmade puzzle-piece smiles, forged in his pottery studio. He gifts them to anyone in need of a smile.

“You keep it as long as you need it or pass it on to someone else who needs it,” said Dauby, a 20-year-old Carmel resident whose varied talents and eclectic tastes belie a lifelong condition that doesn’t deter him.

“Blake has never let this disorder slow him down,” said Steve Dauby, Blake’s father. “He is very active in his community, school and various clubs. He has participated in show choir, orchestra, Best Buddies, student government, dance marathon and Carmel High School Television, just to name a few things.”

Of all things, Blake is probably best known for his ceramics work, a skill he developed at Carmel High School — and one that led to his recent founding of Blake’s Smiles, a nonprofit that raises awareness and funds for groups that support autism causes.

Blake, who has already donated $200 to charities by selling and auctioning his ceramic pieces, discovered his artistic gift after taking an art ceramics class at Carmel High School, where he graduated in 2017 with a certificate of completion and participated in graduation ceremonies.

“We reluctantly signed him up thinking he might not make it past his first day,” Steve Dauby said. “Four years later, with the help of his special aides and patient art teacher Ms. (Sarah) Wolff, he has made incredible clay pieces and has been privileged to have several of his pieces exhibited in annual art fairs. It’s amazing that he now dives into the wet, sloppy clay and can master the spinning wheel.

“The most amazing thing was the social improvement we noticed and was told about while he was working side-by-side with other students on projects.” 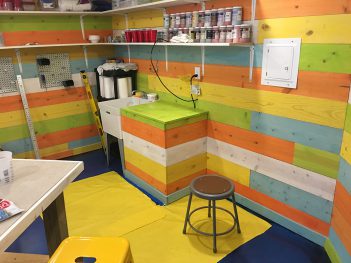 Blake Dauby’s ceramics studio in the basement of his family’s Carmel home.

Buoyed by Blake’s affinity for ceramics, his parents, Steve and Barbara, set up a studio for him in the basement of the family home. There, he creates everything from vessel vases to pots to Sgraffito drape molds to, of course, smiles.

“(I) took an art class in high school and made some cool stuff,” Blake said. “(I enjoy) shaping stuff, bowls and cups, on the wheel.”

Besides creating ceramic art, Blake also paints, plays guitar, violin and piano and sings the national anthem at CHS basketball and lacrosse games and at autism events. He also works 12 to 15 hours per week at Walgreens on Michigan Road and dedicates time to establishing Blake’s Smiles, which derives its name from his early childhood habit of asking people who weren’t smiling the same question: “Is it fun?” 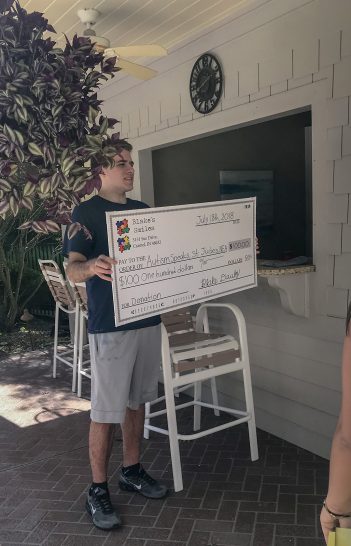 “Since the early age of 3, Blake has been a visual learner and struggled socially,” Steve said. “He would famously ask anyone he would see without a smile on their face, ‘Is it fun?’ Most people had no clue what or why he was asking this, but it was his way to calm himself that everything was OK if people did not have a smile on their face.”

On Aug. 3, Blake will participate in the DOZ Charitable Foundation’s outreach program, which in the past five years has donated more than $100,000 to local charities. Dauby O’Connor & Zaleski is an accounting firm in Carmel, where Steve Dauby is a partner.

During the program, part of a DOZ recruiting event for accounting students, Blake will speak about and share his art pieces. Everyone will literally leave with a smile.

“The students will actually go home with one that Blake has already made,” said Nicole Wright, assistant controller for DOZ. “They can take them back with them and share the smiles.”

Diagnosed with autism as a young child, Carmel resident Blake Dauby — and his family — endured many of the trials and tribulations associated with the disorder.

“Like most kids on the autism spectrum, growing up Blake had numerous sensory issues,” said Steve Dauby, Blake’s father. “Many of these issues can be crippling and alter not only the child but loved ones and care givers. Most refer to the child as being on sensory overload. One of Blake’s many sensory issues was smell and taste. He would not allow his hands, face or lips to touch anything with an odor, different smell or wasn’t clear in appearance.”

“After many months of home therapy sessions with professionals, there was a sign of hope.”

In time, Blake became involved in myriad activities, including music, clubs, student government and art. He looks forward to a future that includes his job at Walgreens, making and editing music videos, overseeing his nonprofit Blake’s Smiles and refining his art.

Oh, and one other thing.

“Having fun,” said Blake, who has three sisters Stephanie, Amanda and Samantha, and a brother, Matt. His mother is Barbara Dauby.