When Steven Jorro’s wife hit a pothole in Fishers with her car while returning from the gym, Jorro thought the solution would be as simple as contacting the city, filing a claim for the damage and receiving the funds. However, it didn’t work out that way. 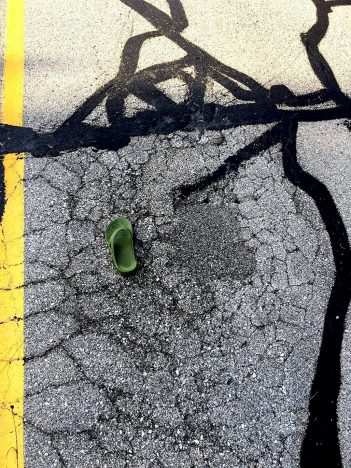 Steven Jorro compares his shoe to the size of the pothole on Cumberland Road. Jorro’s wife hit the pothole with her vehicle, causing more than $300 worth of damage. (Submitted photo)

The incident occurred in January after dark when the car hit the pothole on Cumberland Road just north of 126th Street.

“It destroyed the driver’s side front tire and the suspension needed aligning,” Jorro said. “I contacted the city and (they) responded respectfully and thoughtfully and apologized for the damage, and then explained the process of making a claim.”

The process, according to the city, is as follows:

“A Notice of Tort Claim must be filed with the City of Fishers within 180 days of the incident. The city then has 90 days to review the Notice and any supporting documents and respond with an approval or denial of the claim. If the city doesn’t reply within 90 days, the claim has been denied. The claim must include the claimant’s name, address, phone, date and time of the loss, location of the loss, description, extent of loss being claimed, names and contact information of all involved including witnesses, amount of damages being claimed and signatures.”

Jorro said he filed the claim within the 180 days. After sending the claim to Selective, the city’s insurance agency, Jorro received what he deemed an unsatisfactory reply.

“(The insurance adjuster) said he did a thorough investigation and there’s no evidence (of the pothole) being reported prior to my letter,” Jorro said. “Apparently, the city or state, or whoever is in charge of the roads, won’t pay you unless (the pothole) has been reported beforehand. I was disappointed because I knew there was a great big pothole out there.”

Jorro said damages totaled $307.13. The Carmel resident said a similar incident occurred during the winter when a Carmel snowplow damaged his mailbox. Jorro reported the incident to the City of Carmel and the city immediately replaced his mailbox.

“I was a bit disappointed at the tone of the letter. Carmel gave me the benefit of the doubt and replaced it,” Jorro said. “This insurance company is giving Fishers a bad name.”

Jorro is still working with city staff to resolve the issue.